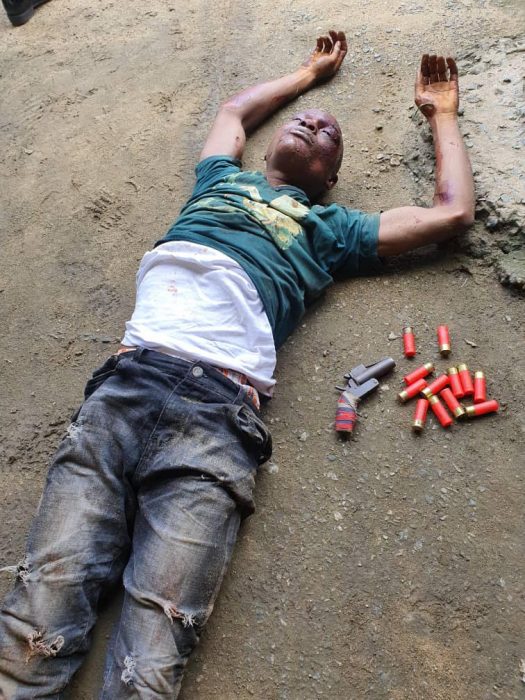 The police in Rivers State have gunned down a notorious kidnap gang leader, Linus Lebari, 35, who goes by the nickname: ‘Devil.’

The killing of Devil came barely a week after the Rivers Police Command’s outfit, ‘Operation Sting’, gunned down “Lucifer,” a notorious kidnapper.

Men of the Bori Police Station, led by the Divisional Police Officer, DPO, on Sunday at about 8.16 pm, in a coordinated operation gunned down Devil, also known as ‘Bobby.’

The suspected kidnapper, who hailed from Tekon Sogho in Khana Local Government Area of Rivers State, and had been on the wanted list of the Police, was trailed to a criminal’s hideout in a forest at Okwale, on the boundary between Rivers and Abia States after a gun duel.

According to DSP Nnamdi Omoni, Rivers State Police Command’s spokesman, “the hoodlums on noticing irregular movements around their camp, started shooting randomly, but in a return fire from the Police, one of them was gunned down, who was later identified to be Linus Lebari from Tekon Sogho, the leader of the kidnapping gang responsible for all the attacks on the Ogoni axis of the East/West Road and whose gang has killed over 30 people in the two Local Government Areas of Khana and Gokana, after collecting ransom.”

Omoni also said during the operation, two police officers sustained gunshot wounds and were currently responding to treatment, while one locally made pistol and some cartridges were recovered.

He assured that efforts were on to arrest other gang members who fled with gunshot wounds.

The Police spokesman further said that the Commissioner of Police, CP Mustapha Dandaura, had assured the public that the onslaught against arms banditry in the State would not cease until all criminal elements were taken away, while appealing for cooperation from the public.