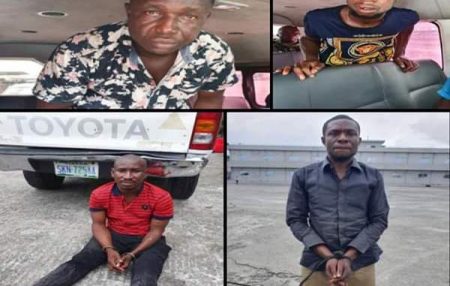 Men of the Nigerian Army have arrested four suspected gang leaders who were declared wanted for causing mayhem in Rivers communities.

Colonel Aminu Illiyasu, the Media Coordinator for Army Operations, one-time spokesperson for Army 6 Division in Port Harcourt disclosed on Monday that these suspected gang leaders were arrested in their houses simultaneously and all the targets were involved in kidnappings.

“Troops on Operation MESA raided the criminal hide-outs of some identified kidnap kingpins in Rivers State. The suspected kidnappers who have been terrorising innocent citizens met their waterloo when troops of 29 Battalion simultaneously raided their criminal hideouts in Obio/Akpor, Tai and Gokana LGAs of Rivers State on 2nd October 2019.” said Colonel Iliyasu in his statement.

Illiyasu further said: “The raid led to the arrest of 4 high profile criminals who have been on the Security Agencies’ wanted list. Those arrested include Dumbari Bro from B-Dere, Victor Dokara from K-Dere, Gbaraco Kaviloba from Lewe, and Confidence Friday from Bodo community.”

All the four communities where the suspects are reportedly from are parts of Ogoniland in Gokana Local Government Area of Rivers State, he said.

However, after military investigation, the four kingpins arrested by the army would be handed over to the appropriate security agency for prosecution.

Meanwhile, the four kingpins arrested by the army would soon be handed over to the appropriate security agency for prosecution after military investigation, said Mr Iliyasu.