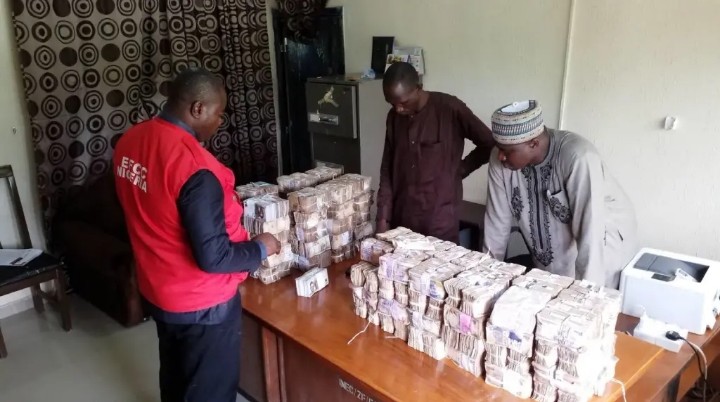 Operatives of the Economic and Financial Crimes Commission (EFCC) on Wednesday took away four ‘Ghana-must-go’ bags suspected to contain money from the Zamfara office of INEC.

The News Agency of Nigeria (NAN) gathered that the operatives were at the Independent National Electoral Commission (INEC) office in Gusau in continuation of its investigation over alleged non payment of ad hoc staff who conducted the 2019 general election.

The operation was sequel to a petition by an ad-hoc staff of the electoral body, alleging that officials of the commission illegally deducted part of the allowance due them for the last general election.

Eye witnesses told NAN that the EFCC operatives arrived the office around noon with heavily armed personnel and ransacked the facility for close to two hours.

The eye witnesses further told NAN that all the four bags and some documents were allegedly recovered from the office of the accountant.

Some INEC officials who were earlier arrested by the EFCC were brought along during the two-hour search and were afterwards taken back into custody.

A petition to the EFCC by Abdullahi Nasiru, one of the ad hoc staff, had alleged that they were shortchanged by INEC to the tune of over N80 million in the allowances paid to them after the general election when compared to what was paid ad hoc staff in other states.

The EFCC operatives and INEC officials refused to respond to questions from newsmen after the search.

Checks reveals that the recovered fund is suspected be part of the funds illegally deducted from releases meant to cater for the movement of materials and electoral officials as well as the provision of chairs, tables and canopies for the 2019 governorship and presidential elections in the state.