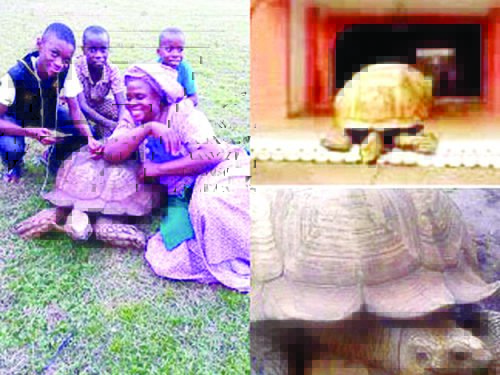 In the physical realm, Alagba, the 344-year-old tortoise, which enriched the palace of Soun of Ogbomoso, died last week. But, the town is not ready to lose it yet, as Oba Jimoh Oyewunmi plans to give the animal the chance to remain for another century, writes Southwest Bureau Chief BISI OLADELE

While he was alive, Alagba was more than a diapsid. He was arguably the oldest living mammal in the world. He was venerated, loved by the people, who turned his abode in the palace to a tourist point.

Alagba, the turtle, must have drawn its name from the fact that it was the oldest creature. No one could call him by his name, so Alagba was adopted, indicating that it was a male. He drew his own crowd. Strong and friendly, Alagba was the reason many people trooped to the palace in its days, according to Prince Ademuyiwa Oyewumi.

No one saw the king unless, he saw Alagba, except of course you were not new to the palace before.

In Ogbomoso, Alagba was regarded as the oldest indigene. It was the King’s most besotted pet. The King, met it in the palace. Alagba was nourished by a succession of kings, who inherited him as part of the relics of their ancestors.

Legend had it that he and his wife had been kept by the Soun of Ogbomoso, but the female soon died, Alagba outlived monarchs who were his custodian. Alagba enjoyed like a royalty. He lived like one, for over three centuries.

Then, last week, he fell ill, just a little sickness and couldn’t eat anymore. Then he died, at the ripe age of 344 years. Just like that.

Alagba was more than a turtle in status. He represented a part of the oral history of the Yoruba race. Now, the Soun has lost an ageless companion.

Some hardliners are questioning his acclaimed old age. But Alagba’s story and history is rooted in Yoruba oral history and that is why the Soun is thinking of preserving Alagba’s remains for posterity.

Prince Oyewumi told The Nation that nobody can actually put his finger on who gave the tortoise the name Alagba (which means an old fellow). “We just came to know him as Alagba. Two to three generations met it with that name,” he enthused.

To him and the secretary to the palace, Mr Toyin Ajamu, Alagba was not just a tortoise, it grew to become an Ogbomoso personality. This makes all palace inhabitants, particularly princes and princesses, feel that a member of the Oyewumi family and a notable Ogbomoso personage had passed away.

Prince Oyewunmi recalled that as a 12-year old, he used to climb Alagba while it moved him from one place to another in the palace, just as other princes and princesses did at around the same age.

Life with Alagba in the palace

The tortoise was an integral part of the family of every new Soun. Sharing no deep emotional attachment with any particular individual, children of new monarchs flowed into the new life of having Alagba as a new member of their family the moment they moved to the palace. Alagba became part of the sources of children fanfare in the palace. They played with it and rode on its strong back to tap fun.

This everyday experience, however, made some of them develop an emotional attachment with Alagba to the extent that some of the children of the reigning Soun were hit emotionally by its demise.

According to Prince Oyewumi, princes and princesses felt a sense of loss on hearing the news of Alagba’s death.

He said: “Its death was not just felt at the palace, it was felt outside the shores of Nigeria. When I informed my sisters of Alagba’s death, they were down emotionally for the whole day. It was because of the way we grew up with it. It was like a member of the family. So, it felt like losing a brother or sister. We grew up to know it. There is no way we can describe our growing up without mentioning Alagba. When we were around 10 to 12 year olds, two of us would stand on its back, riding on it in the palace. It was really strong.”

There was that attachment to Alagba as an Ogbomoso person. It grew to become the oldest indigene.

According to him, Alagba ate all manners of food including amala, eba and virtually all foods eaten in the palace. Children also fed it to tap fun.

Two palace officials had the job of looking after Alagba’s well-being. It was said to have developed a tumour two years ago, requiring a surgery. Prince Oyewumi recalled that his father rejected the idea of the surgery when the veterinary doctor explained that the chances of surviving the surgery were 50 per cent. “Somehow, it survived the tumour,” he said.

Many people trooped into the palace to see and experience Alagba due to its age and strength. It was the reason so many people visited Ogbomoso and the palace.

For its importance to Ogbomoso and Nigeria, Prince Oyewumi said museums have applied to preserve its body. But Oba Oyewumi has consistently refused their application. He reasoned that the palace should find a way to do what any museum wants to do to the remains and retain Alagba in the palace.

According to the palace secretary, the Natural Museum of the Obafemi Awolowo University (OAU), Ile-Ife, has offered to preserve Alagba’s corpse for another 100 years. But he revealed that a resident of Ogbomoso has come forward to demonstrate ability for the same. Hence, the monarch has agreed that Ife should preserve Alagba’s body for 100 years in the palace in order to retain its relevance.

Ajamu said: “Our focus is to preserve it for unborn generations to also see it. Since we all have a common purpose, we agreed to have it in Ogbomoso.”

If well preserved, Alagba will retain its place in the palace where it lived for most of its life. It may also find its way into the Guinness Book of Records as the longest living creature on earth.