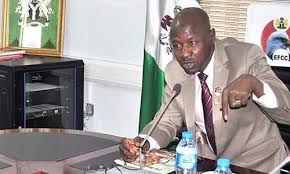 The Economic and Financial Crimes Commission (EFCC) has said its intervention had assisted to save N4.5 billion monthly, lost to ‘ghost workers’ on the federal government’s payroll.

A statement on by EFCC Spokesman, Mr Wilson Uwujaren, quoted the commission’s Acting Chairman, Mr Ibrahim Magu, as saying this while delivering a lecture on Thursday at the National Defence College (NDC) in Abuja.

Magu spoke on the topic “Corruption and Anti-corruption Strategies in Nigeria: Way Forward,” at the Course 28 Study Programme of NDC with the theme: “Economic Diversification and National Development”.

He reiterated the commitment of the current administration to rid the country of corruption, adding that the involvement of the EFCC had helped in fighting corrupt practices.

Magu also commended the introduction of Integrated Payroll and Personnel Information System (IPPIS) into salary payment, which he said had assisted to save such amount for the government.

“The involvement of the EFCC in tackling the scourge of ghost workers in the civil service has led to a redemption of over N4.5 billion naira monthly.

“The EFCC has been engaged in eradicating ‘ghost workers’ from the federal government’s payroll which has resulted in saving as much as N4.5 billion naira monthly.

“The Bank Verification Number (BVN) has been an effective tool in carrying out investigations effectively, as it has curtailed the opening of fake bank accounts by fraudulent individuals.

“The only gateway to development is through fighting corruption.

“If Nigeria breaks away from corrupt practices in government businesses and in the private sector, we will transform into a model state overnight,” he said.

The commission’s acting chairman disclosed that the commission had secured up to 2,165 convictions over a period of 10 years between 2009 and 2019.

The EFCC boss called for more collaboration among security and law enforcement agencies through the National Anti -Corruption Strategy aimed to bring about coherence and synergy among security agencies in the country.

The Commandant of NDC, Rear Adm. Markson Kadiri, emphasised the need for proper utilisation of funds, urging participants to key into the corruption fight.

“We all have a role to play to ensure that monies meant to be used for public good will be applied according to what and how they are meant to be utilised,” he said.