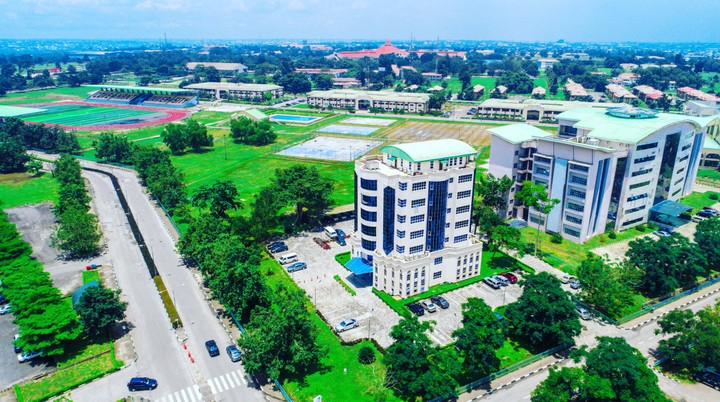 VISION 1 OF 10 IN 10:
A PROPHETIC VERDICT ON THE VERGE OF FULFILLMENT
*Step by Step tracking of Bishop David Oyedepo’s Covenant University Prophecy

In June 2012 during the graduation of the 7th set of Eagles, Dr David Oyedepo announced‘Vision 1 of 10 in 10’. This vision stated that CU would become one of the top 10 universities in the world by 2022.

The vision sounded impossible. There was so much negativity against private universities in Nigeria. As for public universities, various governments both federal and state had struggled endlessly with numerous challenges such as staff remuneration, equipment, funding and the likes which had led to incessant strikes. It was thus a tall dream for a young university to even dare to dream of the kind of thing the Chancellor was bringing out of his mouth.

What pedigree did she have to declare such? Consistently and for many years, no Nigerian university was listed among the top 1000 in the world by any parameters or rankings whether webometrics or even the more prestigious Times Higher Ranking.

This was not a construction of another 50,000 capacity auditorium which bragging rights he still had, this was a statement from the village of Ota challenging the Harvards, Oxfords, Yales and Cambridges that had held sway for over a century.. Even the Prophet/Chancellor’s bravest followers believed he had overplayed his hand finally this time.

In 2010, Covenant emerged at 94th position among Africa’s top 100 universities with a 10th position in Nigeria and has not looked back ever since.

CU also emerged among the top 20 in Nigeria and more, she sat pretty at 7,730 in one of the major university rankings. Declaring that she would be among the top 10 within 10 years therefore sounded like a pipedream. Even a ranking within the top 1000 seemed a joke.

By 2013, CU shot up to become one of the top 25 universities in Africa behind University of Ibadan in Nigeria and 4,289 on the Webometrics world ranking.

The top 10 Ranking of Nigerian Universities for 2013 according to Answers Africa also showed the following:

While the international stage had taken note of Covenant University, locally, it was taking some time to recognize the greatness emanating from within. This trend has continued.

2014
Covenant University remained 25th in Africa and 2nd in Nigeria in July 2014. This time, Nigeria’s ranking body finally took notice.
That same 2014, the CU ranking was 6,178 on Times Higher Ranking. However, it had improved and stood at 2,253 on Webometrics. Slowly and steadily CU had stood out. On the local scene, she had remained the leading private university consistently for 11 years and the second ranked university (Public or Private) consistently for 5 years.

In terms of infrastructure, CU ranked easily with the likes of Obafemi Awolowo University (OAU) but with much better funding and maintenance. Another major move by CU was the enrichment of her library. With one of the most furnished and updated libraries in an African university, she has maintained the standard of Harvard by ensuring a minimum of 10,000 books and other literature come in to her inventory annually while still operating a very vibrant online library.

READ  Lady Appreciates Parents As She Graduates From UNIBEN (Photos)

On Tuesday 10 Feb 15, Webometrics rated CU as 15th in Africa and 1st in both Nigeria and West Africa. She was also rated 1401 globally. For the first time, she was ranked among the top 1,500 of over 19,000 higher institutions globally.
The list top 10 universities in Nigeria with their African and World Rankings as well as Africa’s Top 15 in 2015 are shown below:

The year 2019 has been awesome for the young university. After scrutiny of CU alongside over 1,400 other institutions, against 13 performance indicators across the areas of Teaching, Research, Knowledge Transfer and International Outlook, the balance of power in global higher education is shifting, with CU now Ranked in the 401-500 bracket.

Based on 13 performance indicators, CU has also been ranked in the 151-200 bracket in the just released Timeshighereducation.co.uk #YoungUniversityRankings 2019. This ranking focuses on world best Universities that are 50 years old or younger, with insitutions from 60 countries featuring in this edition.

Since the unveiling of Vision 10:2022 back in 2012, #CovenantUniversity research output has seen a 906.36% geometric increase. This is a testament of an evolving culture, from solely a teaching institution to a research oriented citadel of learning. CU has consequently attracted grants, won awards and recorded upward movement in virtually all ranking parameters of notable ranking agencies around the world.

Not only that, CU is now the undisputed best private university in Africa. Last year, it held a joint position with American university of Cairo. But AUC slipped down by 200 while Covenant rose 200 places. It is also the youngest university in top 5 Africa.

Professor Remi Atayero the incumbent Vice-Chancellor under the leadership of the Chancellor is relentless in the pursuit of the prophetic vision to be head and shoulders among the best in a very short while.