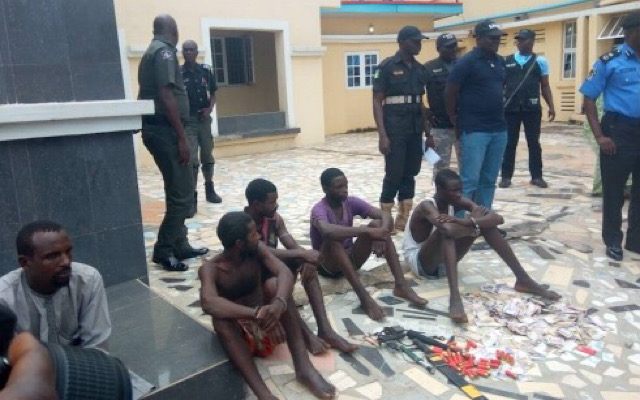 Plateau State Police Command has arrested five men gang who specialized in robbing POS transaction Centres in Jos and its environs along with the other twelve suspects involved in different heinous crimes in the state.

Addressing newsmen in Jos, the State Commissioner of Police Mr. Isaac Akinmoyede said the command recently arrested a five-man gang who specialized in snatching cars and robbing POS operators in Jos and its environs.

He said the search conducted at their residences led to the recovery of two foreign-made pistols, one locally-made revolver pistol, eleven 9mm live ammunition, one Peugeot 406 car with registration No. DKA 944 BG adding that in the course of interrogations the suspects confessed that in September 2019, they robbed a POS operator at Kufang Miango road, Jos and in the process shot their victim.

“They also confessed to robbing and killing one POS operator at Dadin-Kowa and that they also shot one woman in her POS shop in Zarmaganda, all in Jos South LGA of Plateau State. Victims were called upon and they volunteered statements and confirmed the robbery incidents in their shops. The investigation is in progress” he said.

Mr. Akinmoyede further pointed out that the command also arrested a notorious kidnapper adding the suspects identified as one Ibrahim Ali Kuru of Lare village, Bogoro LGA of Bauchi State together with seven others broke into the house of one Laben Fidelis Danladi of Ungwan-Rina village in Shendam LGA of Plateau State.

The Commissioner of Police stated that the group kidnapped Danladi and took him to an unknown destination and demanded a ransom of two million naira adding that a ransom of one million, two hundred thousand naira was paid before the kidnappers released the victim.

According to him, intelligence received led to the arrest of Ibrahim Ali Kuru whom the victim identified as the leader of the gang that kidnapped him adding that investigation has been completed and the suspect would be charged to court soon.

He also pointed out that the Police operatives at Pinau village in Wase Local Government Area of Plateau State while on foot patrol sighted a motorcyclist carrying a pillion passenger who was bearing an AK 47 rifle.

“When they saw the police personnel approaching them menacingly, they abandoned the AK 47 rifle with breach No. 01968 and sped-off with the motorcycle. The firearm has been recovered and the investigation is ongoing to arrest the fleeing suspects for investigation and prosecution.”