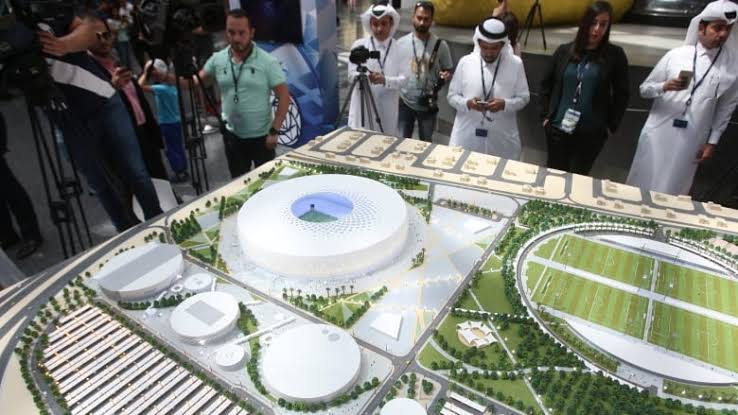 One of the hottest countries on Earth is installing air conditioning outdoors and painting roads blue in a bid to keep cool.

Temperatures in summer now reach a sweltering 115°F (46°C) in Qatar, where the 2022 World Cup has already been moved to winter to avoid the searing heat.

But now giant coolers have been installed alongside pavements and in outdoor shopping malls so the temperatures are bearable for people going about their everyday lives.

And in Doha, the country’s capital, the Public Works Authority has painted the Abdullah Bin Jassim Street near one the city’s biggest souq markets the colour blue to reduce the temperature of the asphalt by 59-68°F degrees.

Roads in Qatar’s capital, Doha, have been painted blue because the colour absorbs less heat than black tarmac so the surface remains cooler for longer.

Engineer Saad Al-Dosari said: ‘The temperatures of dark asphalt is 20 degrees Celsius higher than the actual temperature because black attracts and radiates heat’

Cold air will be pumped into stadiums at the 2022 football World Cup, which will be held in the Gulf state, via large cooling nozzles linked up to chilled water.

Al Janoub stadium is one of eight soccer stadiums that Qatar is prepping for the 2022 World Cup.

Solar panels dot the rooftops around a large air-conditioning building in heart of the Msheireb neighborhood.

Cobblestone walkways at the Galeries Lafayette outdoor mall are equipped with air conditioning vents to cool shoppers as they browse.

The Msheireb is designed to take advantage of breezes and features sun-blocking canopies.

The walkway through Umbrella Park in Doha, built to connect the seaside corniche and the post office, helps keep pedestrians out of the hot sun.

The walkway uses umbrellas and plants to create a more tolerable atmosphere for pedestrians.

Construction workers near Lusail Stadium, which will host the first and last games during the World Cup, wear clothing and headgear to protect them from the sun.

A man rests in the shade at the Souq Waqif historic market to escape the afternoon heat in Doha.