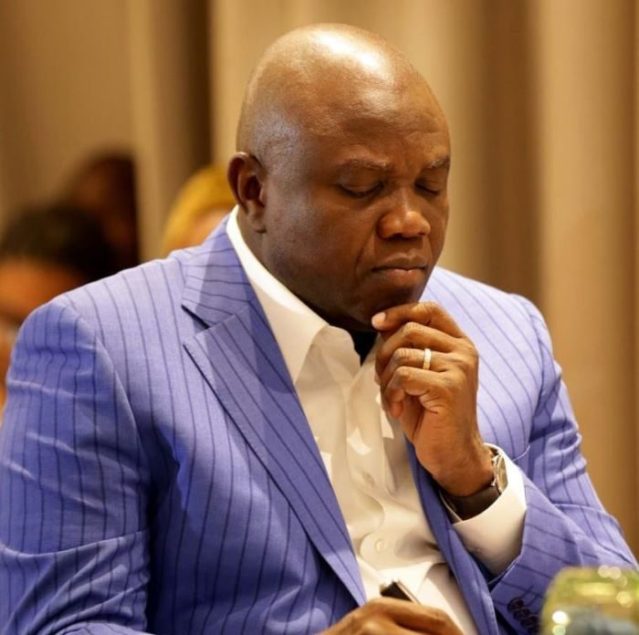 Facts are emerging on why the Lagos State House of Assembly is determined to prosecute and jail Mr. Akinwunmi Ambode, the state’s former governor.

Ambide had been in public scrutiny as the state’s lawmakers had been probing his administration over some alleged shady deals.

While the House of Assembly, under the influence of leaders of the All Progressives Congress (APC) in the state, would want the public to believe that the need to inculcate transparency and accountability in governance with a view to recoup money allegedly lost through inflated contracts by the former governor was behind the ongoing probe, information at the disposal of Sunday INDEPENDENT revealed that permutations on the 2023 general elections might have accounted for the action.

It was gathered that the APC leaders were scared that Ambode was “financially loaded” and could scuttle the ambition of Asiwaju Bola Ahmed Tinubu, his estranged political father and APC National Leader, who was believed to be eyeing the presidency in 2023.

Ambode, believed to have relocated to France having acquired its citizenship before relinquishing power in May 2019, had allegedly compiled dossiers on his former leader, which he might use to discredit Tinubu and scuttle his presidential ambition ahead the 2023 general elections.

Consequently, associates of the APC leader had allegedly vowed that the way forward was to clip Ambode’s wings through a probe into contracts awarded by his administration.

At the last meeting of the Governors Advisory Council (GAC), Tinubu was quoted to have lamented that Ambode was planning to release some information to blackmail him, asking those present to warn the former governor against his alleged plan.

While the issue of abuse of office might be real as alleged by the Lagos Assembly, Ambode’s ability to scuttle or stand in the way of Tinubu’s ambition, according to a party leader in the state, had continued to be the driving force of actions against the former governor.

For instance, when the leaders at the GAC meeting complained about the performance of incumbent governor, Babajide Sanwo-Olu, Tinubu was quoted to have defended the governor, saying Sanwo-olu met an empty treasury and had to seek money from the capital market to embark on projects in the state.

True to his claim, the governor sent a letter to the state Assembly last week, seeking approval for a fixed rate bond of N100 billion from the capital market and an internal loan of N150 billion.

Babachir Lawal, former Secretary to the Government of the Federation (SGF), who was sacked from office, reportedly said Tinubu was in good standing to become Nigeria’s next president.

He said Tinubu possessed the qualities of a good modern president to succeed President Muhammadu Buhari in 2023.

“Bola Tinubu is my friend of many years. Buhari is my big boss. Bola Tinubu, without prejudice that he’s my friend, will make a good president. Other issues notwithstanding, he (Tinubu) will make a good modern president because the presidency these days is scientific. Nigerians, by convention, seem to have agreed that there should be rotation of the presidency,” Lawal was quoted to have said.

Already in continuation of the Ambode probe with the intention of recovering alleged looted funds, the Lagos State House of Assembly had recently threatened to issue a warrant of arrest against him and four others, who served under him (Ambode) as commissioners.

The House had earlier set up two different ad-hoc committees with the responsibilities of probing the purchase of 820 high capacity buses at the cost of N7 billion and the other with the 2019 mid-year budget review.

Both ad-hoc committees’ chairmen, Gbolahan Yishawu and Fatai Mojeed, while presenting their preliminary reports, had indicted Ambode, claiming that the former governor refused to honour their invitation to come and explain why he purchased the buses without approval from the House and why funds unbudgeted for were spent by his administration.

Sunday INDEPENDENT reliably gathered that the lawmakers were ready to do everything possible to bring the ex-governor to book, using every necessary and possible aspect of the law to achieve their aims.

A source close to the House of Assembly, who confided in our correspondent, disclosed that the lawmakers were ready to make the former governor face the law.

“They have facts on their table and they have everything to nail him. I am not trying to take sides with the members, but the evidences they have against the man are enough to send him to jail. The two ad-hoc committees set up by the Speaker have been sitting and what they have been able to gather from those who have appeared before them are more than enough to land Ambode in trouble,” he said.

A day after the lawmakers threatened to arrest Ambode and four other commissioners, who worked with him, one of the ex-commissioners, Wale Oluwo, who served as the Commissioner for Energy and Mineral Resources, wrote to the Speaker of the House, Mudashiru Obasa, explaining that he received no invitation from the members.

Also last Tuesday, the ex-Commissioner for Budget and Economic Planning, Olusegun Banjo, who appeared before the committee, indicted Ambode, alleged that as commissioners, they were not carried along in the awards of contracts with due process allegedly breached.

To make matters worse for Ambode, Banjo alleged that the purchase of the 820 buses by the former governor was not routed through his ministry.

According to him, he became a commissioner in February 2018, and did follow the system he met on ground, which was responsible for shady transactions on the buses that were procured.

He said: “The way the ministry is structured, it did not allow us to function well. The N24 billion did not come to my ministry. We didn’t have a running system. As a commissioner, I could not approve one naira. All the MDAs approached the governor directly.

He also alleged that there was no provision for the purchase of the 820 buses in the 2018 and 2019 budgets and that no Vote Of Charge (VOC) was issued from his office for the purchase. “I never approved any VOC for it,” he said.

On unbudgeted funds, he said, “I don’t know what happens to unbudgeted funds when it comes because the Ministry of Finance does not inform my ministry, we don’t have a running system.”

But, Banjo and Oluwo had denied the reports that they indicted Ambode before the ad-hoc committee.

One of the lawmakers, who spoke to Sunday INDEPENDENT in anonymity, alleged that towards the end of Ambode’s administration, the former governor embarked on so many projects without lawmakers’ approval.

“Most of the last-minute projects Ambode embarked upon, such as the Oshodi Interchange, the buses he purchased at outrageous amount, were not in the budget. He was involved in gross misconduct and misappropriation of funds.

“He left many projects uncompleted and today, Lagos seems to be on hold and not working because there is no money for the present administration to spend,” the lawmaker said.

When asked to give the actual figure that was misappropriated by Ambode, the lawmaker said, “You know, I am just telling you all these things in confidence. I wouldn’t want us to go there because it is something that can cause chaos in the state. But, we have a committee working on these things and at the appropriate time, Lagosians will hear the truth.”

It was yet unclear if Ambode would appear before any of the ad-hoc committees because he was alleged to have obtained French citizenship and might not return to the country anytime soon.

“We have it on a good authority that he is currently in France because he has succeeded in obtaining French citizenship. He left the country months ago and has refused to come back because he knows the atrocities he committed are capable of landing him in trouble.

“But, we will keep watching to see if he would spend the rest of his life in France,” said another lawmaker who also spoke on condition of anonymity.