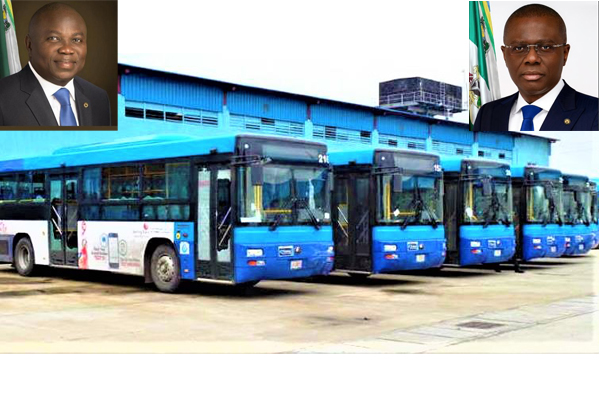 Lagos State, the economic hub of Nigeria, is notorious for a terrifying road traffic.

Every day, over 8 million people, commute in approximately 5 million vehicles cram into a tiny network of just 9,100 roads.

This contributes to the reason why Lagosians spend an average of 30 hours in traffic each week — or 1,560 hours annually.

Successive Governments in the State have tried to find a lasting solution to the mass transit challenges in the state. One of such proffered solution is the provision of comfortable high-capacity mass transit buses.

In this article, we will be highlighting the efforts made by former Governor Akinwunmi Ambode and the incumbent Governor Babajide Sanwo-Olu in the provision of these mass transit buses.

Former Governor Akinwunmi Ambode was known for his zeal towards the improvement of transportation infrastructure in Lagos state.

According to him, the donation was intended to cushion any effect that the removal of subsidy and subsequent increase in the petrol price will have on Lagosians.

Primero Transport Services Limited – a privately-own company and the sole BRT operator in Lagos – was the beneficiary of Ambode’s largess.

According to Fola Tinubu, the Managing Director, Primero Transport Limited, “the governor’s gesture would not only cushion the effect of fuel price, but it would also stabilize transport fares”.

In November 2017, the Ambode-led government announced that it would be injecting 800 new buses in two months; with the aim of making available 5,000 buses in 24 months. And true to the promise, the buses were introduced.

The 800 buses acquired by Ambode are not part of the Lagos BRT scheme. Instead, they were placed under the management of the Lagos Bus Service Limited (LBSL).

The Lagos Bus Service Limited (LBSL) is an agency of the Lagos State government that was incorporated in August 2016. It was set up as a transport asset acquisition, operations, and advisory services company.

The infrastructure provided for the smooth operations of the LBSL buses includes bus shelters, lay-bys, bus flags, terminals, and depots at various strategic points along the routes.

The LBSL-supervised buses are not part of the Lagos BRT scheme. As a matter of fact, they are not permitted to use the dedicated BRT lanes in Lagos.

Governor Akinwunmi Ambode failed in his second term attempt. Thus, he was hindered from achieving his ambition of injecting 5000 new buses into the system.

He is currently under probe by the Lagos State House of Assembly. The ex-governor is being investigated by the parliamentarians for acquiring 820 buses without their consent. He reportedly spent N45Billion in purchasing the buses.

Babajide Sanwo-Olu was sworn in as the Governor of Lagos State on Wednesday, May 29, 2019.

He expressed enormous enthusiasm in confronting the traffic challenge in the state.

In a series of tweet, the governor declared, “Beyond road construction, we have started expanding the bus rapid transit system and gradually reducing the danfo buses on the roads. I am excited to announce that we have purchased over 800 buses to add to the existing BRT fleet expanding to more routes. We are supportive of private investment in transportation that is non-exploitative”.

The acquisition and donation of the buses to a private transport company by the Sanwo-Olu have come under criticism.

Some analysts wondered why the Governor, who claims he met an empty treasury, embarked on such charity.

They also queried the sense in donating the buses to a private company when they could have been donated to the State government-operated Lagos Bus Services Limited (LBSL).

The donation of the buses came 2 weeks after Governor Sanwo-Olu sent a letter to the state Assembly to get approval for a fixed rate bond of N100 billion from the capital market and an internal loan of N150 billion.

Babajide Sanwo-Olu is the 15th Governor of Lagos State.