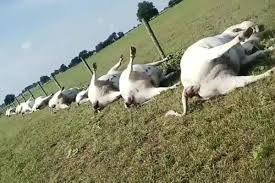 Barely a month after thunderstorm struck resulting to the killing of several cows in Ifedore local government, another thunderstorm has struck killing another eight cows at Ekan-Ile Area of Ikare, Akoko Northeast Local Government Area of the state.

The incident occurred on Tuesday and instead of disposing them, herdsmen who owned the dead cows have roasted them and started selling them to unsuspecting butchers in Akoko area.

However, the sale of cow meat allegedly struck to death by thunderstorm in Ikare-Akoko has been banned by the Ondo State Government.

The Director of Environmental Health Services in Akoko Northeast local government, Mrs Yemisi Adeniyi and her counterpart from Akoko Northwest, Mr Ojo Anthony, said they had arrested some butchers from taking the cow meat to markets.

They cautioned the people of Akoko to stay away from beef in the next few days to avoid consumption of such traditionally and medically cow meat allegedly killed by the thunderstorm.

While reacting to the development, the Chairman of Butchers’ Association in Ikare, Mr Kabiru Ismaila said, ” he was working with government’s environmental health officials to ensure such cow meat was not sold in Akoko markets in the next few days.