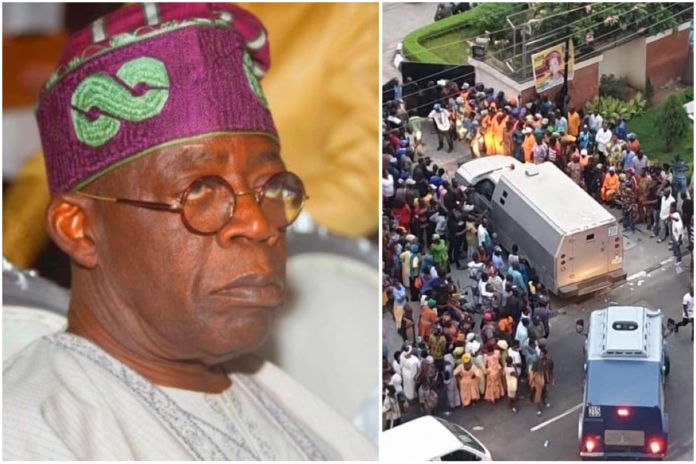 The Economic and Financial Crimes Commission (EFCC) on Friday received a petition to investigate the source of money conveyed in bullion vans to the home of the All Progressive Congress (APC) National Leader Bola Tinubu on the eve of the 2019 presidential election.

The convener of Concerned Nigerians Deji Adeyanju submitted a petition to the EFCC to investigate Tinubu on Friday.

The activist said he felt it was wrong of the APC leader to have had two bullion vans at his Bourdillon, Ikoyi, Lagos home on the eve of the presidential and National Assembly elections.

A copy of his petition have been seen as received, with stamp of the EFCC, requesting it to investigate the former Lagos State governor.

“To the best of our knowledge, Mr Bola Ahmed Tinubu is a private citizen who ordinarily should not be seen with a convoy of Bullion Vans,” Adeyanju said after submitting the petition.

The petition reads, “The commission would recall that it was reported all over the news that Bullion Vans allegedly Contammg an undisclosed amount of cash were Seen entering the home of Bola Ahmed Tinubu, former governor of Lagos State on the eve of Nigeria presidential elections. Tinubu himself admitted to this fact While responding to questioning by journalists.”

Adeyanju wants the anti-graft agency to answer these questions: “What are Bullion Vans doing in the house of Asiwaju Bola Ahmed Tinubu?

“Who owns the content, believing to be cash in the Bullion Vans that were seen entering the house of Bola Ahmed Tinubu on the eve of Nigerian presidential elections?

“Has the commission, based on its core mandates, investigated the source of the Bullion Vans?

Adeyanju called on the commission to swing into action and begin an investigation into the appearance of those Bullion Vans.

“We cannot as a nation have two separate rules for fighting corruption, one for those opposed to the ruling party and another for supporters of the government.

He commended the commission for its continuous efforts in its fight against corruption.

Adeyanju noted that Tinubu’s case “If properly investigated and prosecuted diligently will assure Nigerians of the commission’s willingness to fight corruption that is devoid of party affiliations.”

The acting Chairman of the EFCC, Ibrahim Magu had assured Nigerians at a press briefing on 12, November 2018 that the commission would commence an investigation immediately it receives a petition to investigate Tinubu.

“If you are really interested, write a petition and see whether I won’t act. It is not for us to listen to people on the radio and begin to act.

“Yes, we have intelligence but the surest way to get action is to go and write a petition and substantiate the contents of the petition and see whether I will not act,” Magu said.