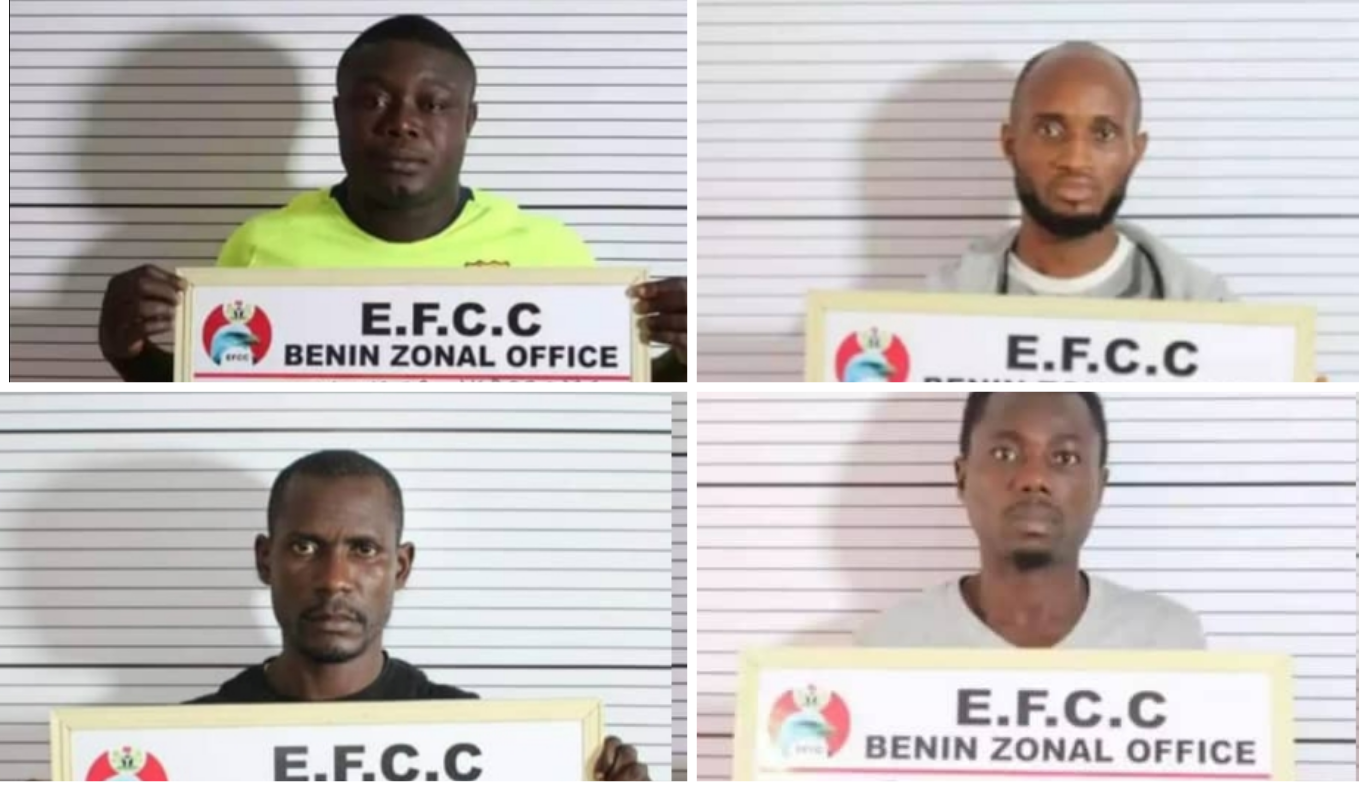 A gang of fraudsters have been cracked down by the Economic and Financial Crimes Commission (EFCC) for exploiting personal data of foreign-based Nigerians to defraud their friends and relations.

The suspects identified as Hon.’ Oladipupo Adebayo, Bimbo Bilewu, Ibrahim Odunayo and Oyeleye Oluwatosi were arrested and currently in the EFCC custody while others are still at large.

In a statement signed and released by the anti-graft agency, it was stated that the Commission had launched a manhunt on the suspects after receiving a petition from one Prof Godwin Ekhaguere.

According to reports, “The professor of Mathematics, who retired from the University of Ibadan, alleged in the petition that the gang defrauded him of sums totalling N565,500 (Five Hundred and Sixty-Five Thousand, Five Hundred Naira). He also alleged that the fraudsters made him to part with MTN recharge vouchers worth N36,000 (Thirty-Six Thousand Naira) in the deal.

According to him, he only realised that he had been scammed after he managed to reach his friends on the phone, who denied sending anyone to him. That prompted the petition.

It was in the course of investigating the allegations that the Commission arrested Bilewu at an ATM point where he went to cash the money sent to him by one Pastor Osuji.

Incidentally, Osuji was also a victim of a crime similar to that which the Commission was investigating.

The gang’s patterns of operation are similar in nature. One of them would call their would-be victim with the impression that he was an old-time friend, now based abroad. He would claim that he has a mouth-watering gift to be sent through someone who is allegedly coming home for an event.

“The victim would then be handed over to the ‘home-bound’ member. He would be the one to make all sorts of requests ostensibly to clear some obstacles to delivering the consignments from the foreign-based ‘relation’ or ‘friend’, as the case may be.

Investigations into the gang’s operations revealed that they have a mobile application used in making a local number appear foreign to the call recipient.

They also use unregistered SIM cards to make their calls in order to blur out chances of tracing their real identities.

Another trick to evade arrest, according to investigations, was to open bank accounts in other people’s names and take over the ATM cards from them. They direct their victims to pay into such accounts and use the ATM cards to withdraw the cash.

The suspects have owned up to the allegations against them, and are now helping the Commission in further investigations into crimes of similar nature.