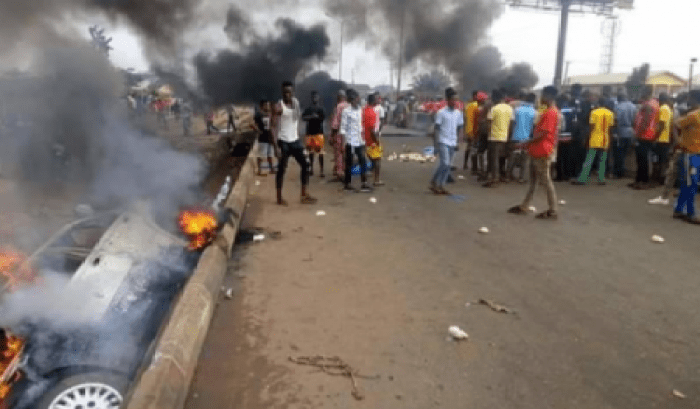 Tragedy struck on Saturday morning in Benin, Edo State, when a fast-moving BMW car crushed four children of the same parents to death.

It was gathered that the children were knocked down while crossing the busy Uselu/Lagos Expressway, close to the traditional ground, in Egor Local Government Area of the State.

The incident angered the community youths who blocked and set a bonfire on the road.

The ill-fated car was also pushed into the deep side drain of the road and set on fire.

The development caused traffic gridlock and also paralysed business activities around the area.

Commuters were stranded and many of them forced to trek a long distances​ to their destinations​.

When journalists visited the scene of the accident, a few policemen were seen trying to restore normalcy on the road.

A resident in the area told journalists the children were sent on errand by their mother.

The resident who did not want to me named, said: “That road is too busy. It is even difficult for an adult to cross the road, let alone your own children. Why send your children on errand without going with them?”

Efforts to get reaction of the police authority failed, as calls to the mobile phone of the State Police Command PPRO, DSP Chidi Nwanbuzor, could not go through.