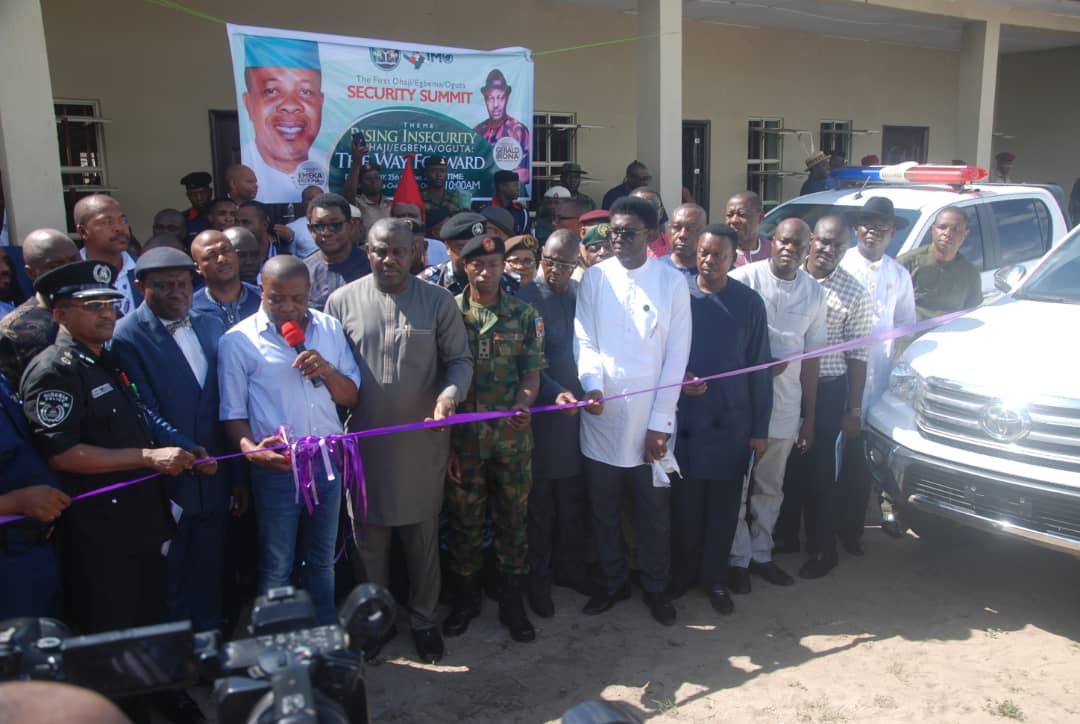 Deputy Governor of Imo State, Engr. Gerald Irona, says people of the two oil producing local government areas of Ohaji/Egbema and Oguta in the state are not criminals.

The Deputy Governor made the clarification in a welcome address he delivered during the first Security Summit of Ohaji/Egbema and Oguta local government areas, held at Oguta Civic Center, Oguta, weekend.

Engr. Irona described the summit as aimed at addressing security challenges in the two oil producing Local Government areas of the state.

He said: “This Summit is aimed at addressing security challenges in the two oil producing Local Government Areas of Imo State. It is expected that the meeting will identify the causes of insecurity in the area and proffer possible solutions. Today, we shall agree on how best to protect our people.

“The present Government of Imo State identified some flashpoints. Principal among the flashpoints are Ohaji/Egbema and Oguta Local Government Areas. Co-incidentally, that is where we have the oil facilities and installations in Imo State.

“Stakeholders therefore appealed to His Excellency, the Governor, Rt. Hon. Emeka Ihedioha, to approve the re-jigging of the security architecture of the area. His Excellency graciously approved this summit, with a view to creating a forum for the discussion of the worrying security issues in the area and this is why we are here today. Efforts are being made to ensure a sustainable offensive against every form of criminality in the state. This Summit is one of such efforts.

“Again, the provision /donation of vehicles to Law Enforcement Agencies by ISOPADEC to aid their operations is part of the ongoing efforts towards strengthening the security of the area.

“The truth is that we are not criminals. A few bad eggs are making our area notorious. We shall not allow them to tarnish our collective image. No one shall make us live in fear in our ancestral homes. No one will frighten and threaten us at will again. That era is gone.”

Continuing, the Deputy Governor identified forms of criminal activities in the area to include cultism, kidnapping, oil bunkering, banditry, rape, armed robbery and proliferation of arms.

He expressed appreciation to the Governor of Imo State, Chief Emeka Ihedioha, for what he described as his show of love for people of the area, describing him as a promise-keeper.

Meanwhile, as part of its support to the security of lives and property, ISOPADEC at the weekend donated six Hilux vehicles to law enforcement agencies in the state.

Commissioning the vehicles during the first Security Summit of Ohaji/Egbema/Oguta, Governor Ihedioha reiterated the commitment of his administration to the security of lives and property in the state.

He commended the ISOPADEC management for what he described as their people-oriented programmes, urging them to do more to better the lives of the people.

Earlier in their remarks, Chairman of the occasion, General Kalu Egwuagu, and Special Adviser on Security to the Governor of Imo State, Raymond Nkemdirim, described security as essential to development, even as they urged law enforcement personnel deployed to the area to be professional in the discharge of their duties.