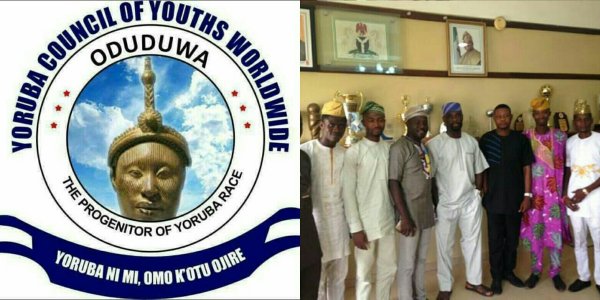 The Yoruba Council of Youths Worldwide, an apex youth umbrella organisation in the South West, has passed a vote of confidence on the Buhari/Osinbajo-led administration for its commitment for its continued efforts in improving the welfare of Nigerians and tackling national challenges.

In a press statement released over the weekend in Lagos, Aremo Oladotun Hassan, a legal practitioner and president of the apex youth umbrella organisation, the group pledged its continued support to the Buhari/Osinbajo-led administration, especially as it has continued to show its commitment towards improving the nation’s economy and addressing the country’s security challenges.

The group said the strides of the incumbent administration could be seen especially in its efforts towards improving the areas of security and the economy, adding that the Buhari/Osinbajo government has committed more resources in the fight against insurgency in the North East, armed banditry, kidnapping and other sundry crimes in other parts of the country.

“Despite the unfortunate incidents of kidnapping and banditry in some parts of the country, we are confident that the efforts of the administration of President Muhammadu Buhari/Prof. Yemi Osinbajo to resolve these challenges would yield positive rewards in no distant time.

“This is already evident in the successful meeting President Buhari held with his Russian counterpart, Vladimir Putin, which is aimed at building stronger bilateral relationship between both nations, for a mutually beneficial economic and security ties.

As President Buhari noted in Sochi, Russia, while speaking to a gathering of Nigerian students and professionals, we believe that his government is truly committed to protecting Nigerians at home and abroad,” the statement read.

Hassan reiterated that Russia was a strong and dependable super power and ally, hence Nigeria’s recent move in Sochi was highly commendable.

“We appreciate Vladimir Putin and the entire Russians for giving Africa a ray of hope and support, precipitating our commendation and vote of confidence,” he added.

The statement continued, “It is important to highlight Presidents Buhari and Putin’s landmark meeting on Wednesday wherein both agreed to put Nigeria-Russia relations on the front burner and pursue the completion of all abandoned projects initiated by both countries. The two leaders also made the pledge at a bilateral meeting held on the sidelines of ongoing Russia-Africa Summit, in Sochi, Russia, last Wednesday.

“While in Nigeria, Vice President Yemi Osinbajo hosted an inter-faith leaders conference at the Shehu Musa Yar’Adua Centre in Abuja, where he emphasised on the need for self-regulation in the individual use of the social media.

“Indeed, as individuals and citizens of this great nation, it is our responsibility as good citizens to use social media positively and not allow it to become an instrument to promote conflict or heat up the polity. Thus, we must regulate ourselves on social media, even without government regulation.

“The Vice President also harped on the importance of national unity and brotherhood among all Nigerians. We see this move as most important to promoting mutual peace and dousing any tension as a result of some individuals who try to stoke the embers of bigotry, religious differences and ethnic sentiments via vituperations on social media.

“Again, this calls for all Nigerians to guard against the excesses on fake news and lies promoted on social media platforms that are capable of triggering civil disorder and unnecessary crises.

“We commend the Vice President for his patriotism, competence, and doggedness in the face of targeted political onslaughts against his much regarded reputation. We are encouraged that the President continues to demonstrate his commitment to the lofty partnership Nigerians have always known both himself and the VP for.

“Indeed, Buhari/Osinbajo have earned our vote of confidence and this has cemented our belief that under the Leadership of President Buhari and Vice President Osinbajo, Nigeria shall rise again as the giant of Africa indeed.

“We call on all Nigerians to support the administration as it continues to make dedicated efforts towards national development,” the group said.