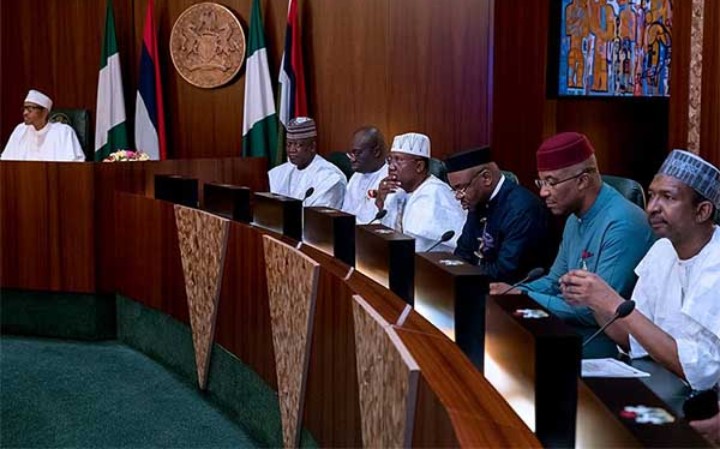 Strong indications emerged yesterday that the controversy surrounding the payment of the new national minimum wage of N30,000 is unending as governors, under the aegis of the Nigeria Governors Forum, NGF, yesterday vowed that the Federal Executive Council, FEC, cannot dictate to them what to pay.

Consequently, the governors resolved that implementation of the new minimum wage and consequential increments would be paid, based on the capacity of states.

Rising from a meeting that lasted five hours yesterday in Abuja, the governors said they would not be bound by the Federal Government’s template on payment of the new national minimum wage.

FEC had last Wednesday set December for take-off of implementation of the new minimum wage, though it took effect on April 18 when President Muhammadu Buhari signed the bill into law.

Addressing journalists after the meeting, Chairman of the Forum and Ekiti State governor, Dr. Kayode Fayemi, explained that the governors took the position based on the fact that states have different numbers of workers, with varied trade unions.

According to Fayemi, the payment of the consequential increase will depend on the capacity of each state.

Asked to reconcile NGF’s position with that of the Federal Government, the NGF Chairman said: “FEC does not determine what happens in the states; states have their own state executive councils and that is the highest decision making body at the state level.

“The forum, as the representative body of the states, keenly followed what happened in the negotiations that transpired that led to that (federal government) template.

“As far as as we concerned, the best the forum can do is to stick to what has been agreed with the states.

“Every state has its own trade union joint negotiating committee and they will hold discussions with their state governments.

“You know that the day after this agreement was reached with labour, I was on record and I made the position of the governors clear, that for us, this was a national minimum wage increase, not a general minimum wage review.

“Yes, that may necessitate consequential increment. We have no doubt about that, but that is a matter for the states to discuss with their workers.”

‘Deduction of N614bn bailout has started’

On the N614 billion bailout deductions by the federal government, Fayemi confirmed that the Federal Government has commenced monthly deductions of the money from the states’ accounts.

He said: “On the N614 billion bailout deductions, the money is being deducted from states accounts.’

Fayemi, who noted that state governors have no problem with the deductions, said: “It has been deducted, as far as I am aware, from state accounts.”

The governors had earlier refused to accept the deductions and insisted that the states were being owed by the Federal Government on rehabilitation of roads.

It was, however, gathered that the governors were, at the meeting, bent on not accepting the bailout deductions by the federal government till debts owed states would be settled.

Reading a communique issued at the end of the meeting, Fayemi also said that following a health update by the NGF Secretariat, the forum commended the rapid response of the Nigeria Centre for Disease Control, NCDC, and the National Primary Health Care Development Agency to nip in the bud the August 2019 yellow fever outbreak which broke out across the country.

READ  Why PDP Is Crying Wolf Ahead Of 2019 Elections – Tinubu

According to him, members pledged to commit counterpart resources to strengthen mass vaccination campaigns in their respective states.

Fayemi also disclosed that members commended progress made by state governments through their Social Health Insurance authorities to enrol and provide health insurance cover for citizens across the country.

He revealed that state governments have registered over two million people in one year, compared to the five million Nigerians registered under the National Health Insurance Scheme over the last 14 years.

The Forum remembered Dr. Stella Adedavoh, the physician who attended to an Ebola patient, Liberia’s Patrick Sawyer, during the Ebola outbreak in 2014 in Lagos State.

“Dr. Adedavoh died from Ebola virus on October 21, 2014, but her memory lives on with the dream of ‘Healtheare for all Nigerians,” Fayemi said.

On the Governor Nasir el-Rufai ad hoc committee on excess crude account and other special accounts, Fayemi, who explained that it was a National Economic Council, NEC, affair, said the committee should submit its report to the council today.

Recall that President of Nigeria Labour Congress, NLC, had while addressing the opening of the 2019 NLC National Leadership Retreat in Enugu last week, said: “I must charge us that it is not Uhuru, yet.

We call on all our state councils to offer the needed leadership and work harmoniously with the Trade Union Congress, TUC, and the Joint National Public Service Negotiating Council, JNPSNC, to ensure effective implementation of the new national minimum wage and consequential salary adjustment which must be reached through a process of collective bargaining.

READ  Why rescheduled Presidential, National Assembly elections may not hold on Saturday — Group

“While commending state governments that have already commenced implementation of the new national minimum wage, we urge that the implementation should be a product of collective bargaining process in line with ILO Convention 98 on Organizing and Collective Bargaining.

‘’We also implore all employers of labour to ensure that the necessary formalities for smooth implementation of the negotiated salaries based on the new national minimum wage are carried out diligently.”

General Secretary of the NLC, Emma Ugboaja, reiterated same last night, saying labour would not accept a situation where states would award salary to workers.
He said the least paid worker, according to law, is N30,000. He noted that from Levels 2 to 17, the consequential adjustment must be negotiated between state governments and trade unions in states.

Reacting, Secretary General of Trade Union Congress of Nigeria, TUC, Musa Lawal, said “The state governors are only playing games. They will pay the minimum wage.

They were represented in the minimum wage committee. They cannot come around to deny their responsibility. They are simply courting labour’s anger and we are ready for them.

Guidelines have not been released by the federal government, but certainly we have assurance that the templates will soon be out.”