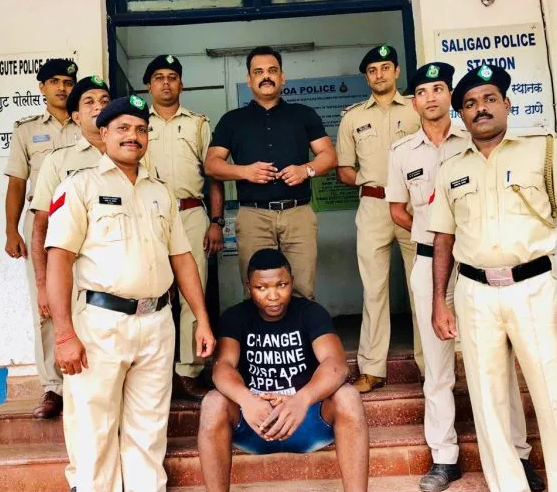 A Nigerian man identified as Ifeanyi Pascal Obi also known as Alex has been arrested on Tuesday, October 29 by Police in Goa, western India for being in possession of drugs worth about Rs 3 crore(about $400,000) from him.

According to reports, the entire confiscated drugs in 2018 was of the same value with the seized drugs recovered from the burst.

A hotel in the beach village of Candolim was raided by the Calangute Police Station which led to the seizure of the drugs after a tip off information.

While parading the 34-year-old Nigerian, the Police Inspector, Nolasco Raposo in charge of the Calangute police station said that the suspect was arrested for possession of the drugs.

“We have seized around 1 kg of Cocaine, around 2 kg MDMA(ecstasy drug), around 760 grams of Amphetamine tablets, around 106 grams charas, 1.2 kg ganja and cash amount of Rs 2 lakh, Raposo told reporters in Colangute.

Obi was arrested earlier in 2011 and booked for overstaying and again in 2012 for the possession of cocaine. The trials are pending in both cases.

“This raid is one of the single biggest seizures by the Goa Police in recent times. We cannot yet comment on his position in the drug network hierarchy as investigations are under process,” North Goa Superintendent of Police Utkrisht Prasoon said.

The police are also looking into the possible negligence by the landlord who rented out the premises to him. The accused Obi has been booked under relevant sections of the Narcotics, Drugs and Psycotropic Substances act.