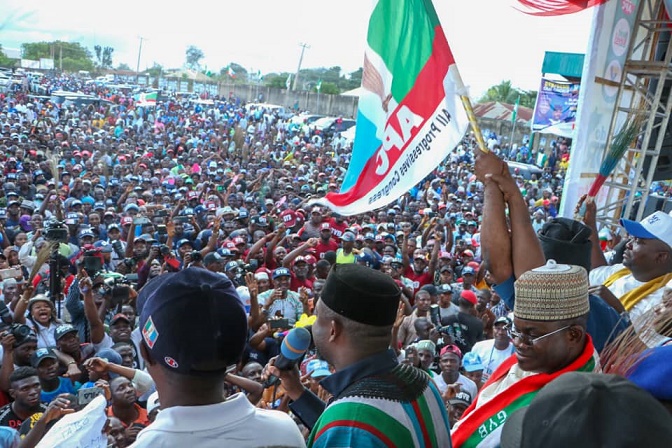 The town of Kabba in Kogi state was shut down for Governor Yahaya Bello and his deputy, Edward Onoja as their campaign train hit the town.

The governor used the opportunity to sell his New Direction program to the people who welcomed him and his entourage.

Music star, 9ice, performed to the admiration of the theming youths who wanted more.

Speaking at the rally, Governor Yahaya Bello said a second term is important for him to finish the civil service reforms which will help the state save more funds and execute more meaningful projects for the people of the state.

The governor opined that the region has benefitted mostly from the New Direction Government as it was housing the Ejiba Rice milling factory which gulped over 4 billion naira and has the capacity to employ about five thousand youths.

He however expressed optimism that his second term in office would further facilitate greater projects which would be of immense benefit particularly with a focus on human capital development.

Earlier while the governor paid a courtesy visit to the palace of the Obaro of Kabba, HRM Oba Solomon Owoniyi he canvassed support for the election of Senator Smart Adeyemi at the senatorial rerun election slated for the same November 16

Equally, his deputy, Edward Onoja noted that despite paucity of funds, the state has paid salaries, and carried out quality projects across the 3 senatorial district of the state.

He added that security in the state has improved from what it use to be before the coming of the Yahaya Bello administration.

He urged the Okun nation to vote enmass for APC and Yahaya Bello at the November 16 gubernatorial election.