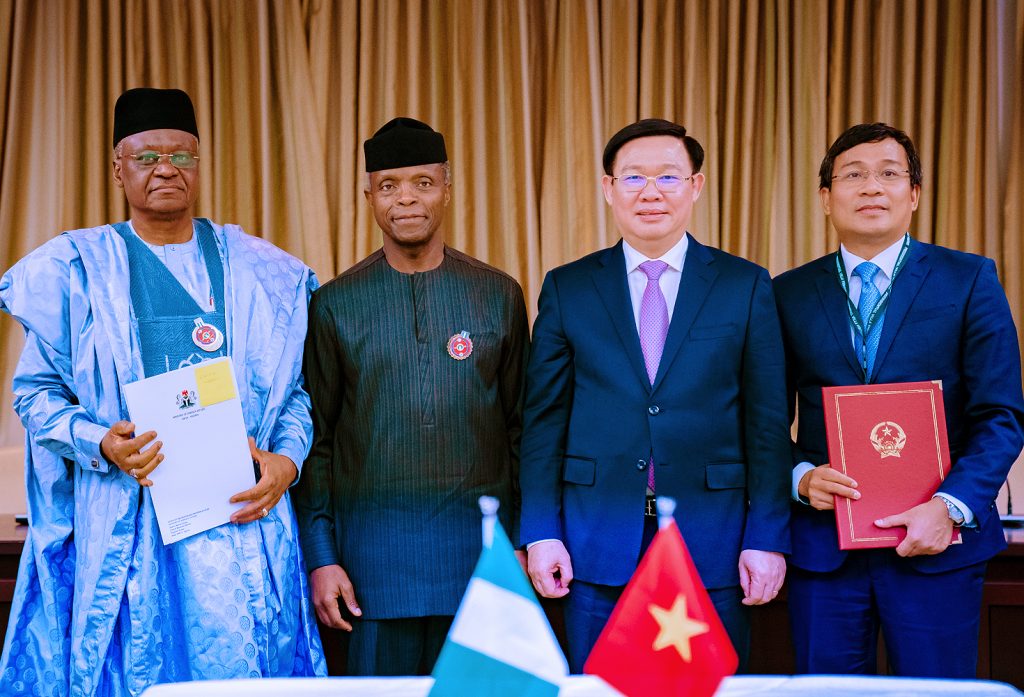 Deputy Prime Minister of the Socialist Republic of Vietnam, Prof. Vuong Hue and Vice President of the Federal Republic of Nigeria, Prof. Yemi Osinbajo share a lot in common.

This was revealed by Prof. Osinbajo himself on Wednesday during a dinner at the State House Banquet Hall, Abuja, where the Vice President proposed a toast for the two countries.

The dinner was organised in honour of the Deputy Prime Minister of the Socialist Republic of Vietnam, Prof. Vuong Hue.

Notable among similarities between the two men which made Osinbajo say Hue was his long lost brother are as follows:

First attribute is that the two of them are number two citizens in their countries.

Second, both were born on same month and same year– March, 1957.

Third, Hue and Osinbajo were both lecturers, and

Fourth, they are both professors.

Osinbajo, had earlier, at the Presidential Villa, received Hue and his team and witnessed the signing and exchange of the Memorandum of Understanding on waiver of visa requirements for holders of Valid Diplomatic and Official Passports.

He said that Nigeria and Vietnam had maintained long standing diplomatic relations since 1976 but there were no high level engagements.

“So, this visit is very significant because we will be looking at the possibility of setting up a bilateral commission between Vietnam and Nigeria so that we can concretise the existing areas of cooperation that we discussed earlier today.

“ I am confident that we can build on the successes recorded in the past while we work on boosting cooperation in business, trade and investment and social and cultural relationship between both countries.

“We agreed on promoting a friendly football match between Vietnam and Nigeria.

In his response, Hue said that Nigeria and Vietnam had a lot of things in common.

He said that aside boosting economic and trade ties, there was need to enhance cultural relationship.

Hue said that the Vietnamese national team was a strong side in Asia as he was looking forward for a friendly match between both male and female national teams of both countries.

In his welcome address at the dinner, Minister of State for Foreign Affairs, Zubairu Dada, said that the Vietnamese delegation, led by Hue, had demonstrated willingness to strengthen relationship between Nigeria and Vietnam.

He said that the delegation had the opportunity of meeting people that matter in Nigeria, especially on the area of trade, commerce and investment.