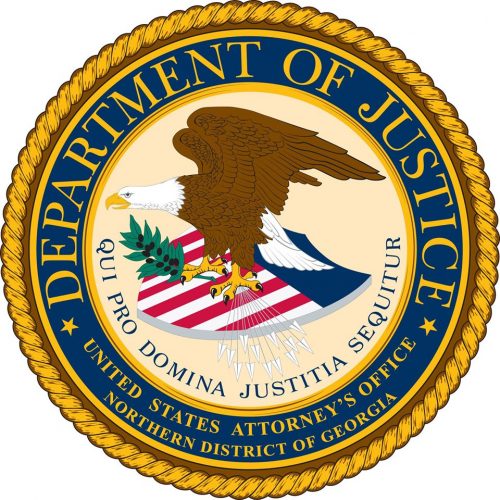 Olu Victor Alonge, charged along with six other Nigerians with a multi-year wire fraud scheme, has been sentenced to a 10-year imprisonment by a court in Georgia, United States.

He was sentenced by U.S. District Judge Timothy C. Batten, Sr., on October 30, 2019 and ordered to pay $1,835,279.00 in victim restitution, according to a statement by the Department of Justice
U.S. Attorney’s Office, Northern District of Georgia.

Three other Nigerians have also pleaded guilty to the 60 counts of wire fraud, money laundering, identify theft and the use of false passports.
.
“The conspirators in these cases, including some who were overseas, used fake personas on online dating websites to trick individuals, including elderly retirees, into giving them large amounts of money,” the statement said.

The conspirators spent weeks building online relationships with victims before taking hundreds of thousands of dollars, often from retirement savings or inheritances.

Alonge and the others created fake online dating profiles using photos of men and women that were sometimes public figures like government officials or models and targeted the elderly, Pak said.

“These conspirators often targeted vulnerable individuals who possessed financial assets and in some cases spent months cultivating romantic relationships with them through online messaging, text messaging, and voice calls”, US Attorney’s office said.

Onebunne and Adara have pleaded guilty and are awaiting sentencing. Ipoade and Oladipupo are awaiting trial dates.

Two other defendants are fugitives and their identities remain sealed

Alonge, Onebunne, Ipoade and Adara will face immigration removal proceedings after the completion of their criminal cases if convicted, the release said.

Read the full statement by Department of Justice:
ATLANTA – Olu Victor Alonge has been sentenced for his role in a multi-year wire fraud scheme that targeted users of American dating websites and caused a total loss of $1,835,279. Six other Nigerian nationals have been charged as part of the conspiracy; three have pled guilty, and Alonge is the first to be sentenced.

“The conspirators in these cases, including some who were overseas, used fake personas on online dating websites to trick individuals, including elderly retirees, into giving them large amounts of money,” said U.S. Attorney Byung J. “BJay” Pak. “The conspirators would spend weeks cultivating online relationships with their victims before defrauding them of hundreds of thousands of dollars, often taken from their retirement savings or inheritances. The judge rightly called the romance fraud scheme ‘pure evil’ before handing down the defendant’s sentence. Combating this type of transnational fraud targeting elderly Americans is a top priority of my office and the Department of Justice; would-be cybercriminals should think twice before engaging in such vile conduct.”

“This sentencing exemplifies IRS Special Agents’ intense focus on the rigorous pursuit of crimes against our most vulnerable citizens, the elderly,” said Atlanta Field Office IRS Criminal Investigation Special Agent in Charge Thomas J. Holloman, III. “Individuals who commit fraud and identity theft of this magnitude and with this degree of trickery, dishonesty and deceit, deserve to be punished to the fullest extent of the law. Olu Alonge perpetuated an elaborate scheme driven by insatiable greed and a blatant disregard for the tremendous damage inflicted on innocent victims. Be assured that IRS Criminal Investigation, together with our partners at the U.S. Attorney’s Office, will hold those who engage in similar behavior fully accountable.”

“I greatly appreciate the hard work of our investigators in pursuing this crime, and that of the U.S. Attorney’s staff for prosecuting this case. Everyone did an excellent job in bringing this serious matter to a satisfactory conclusion,” said Steven A. Sund, Chief of the U.S. Capitol Police.

According to U.S. Attorney Pak, the charges and other information presented in court: The defendants and other conspirators created phony dating profiles on popular online dating websites that described fictitious personas. These profiles displayed photographs of men and women that, in some instances, were public figures, such as government officials or models, taken from publically available websites. The conspirators then used their fake online personas to target users of online dating websites and falsely pose as potential paramours by expressing strong romantic interest in the targeted users. These conspirators often targeted vulnerable individuals who possessed financial assets and in some cases spent months cultivating romantic relationships with them through online messaging, text messaging, and voice calls.

The two superseding indictments returned by a grand jury on June 20, 2018 charged the defendants with a total of 60 counts of wire fraud, money laundering, identity theft, and use of false passports. The defendants charged include:

Two other defendants are fugitives and their identities remain sealed.
Onebunne and Adara have pleaded guilty and are awaiting sentencing. Ipoade and Oladipupo are awaiting trial dates pending the completion of pretrial litigation. Alonge, Onebunne, and Adara will face immigration removal proceedings after the completion of their criminal cases, as will Ipoade, if convicted.

Members of the public are reminded that the indictment only contains charges. The defendants who have not been convicted are presumed innocent of the charges and it will be the government’s burden to prove the defendants’ guilt beyond a reasonable doubt at trial.

Users of online dating websites should be aware of romance scams involving internet dating sites and should exercise extreme caution if asked for money by anyone online or over the phone.

The U.S. Attorney’s Office for the Northern District of Georgia is part of the Department Of Justice Transnational Elder Fraud Strike Force. The Strike Force focuses on investigating and prosecuting defendants associated with foreign-based fraud schemes that disproportionately affect American seniors. These include phone scams, mass-mailing fraud schemes, and tech-support fraud schemes.