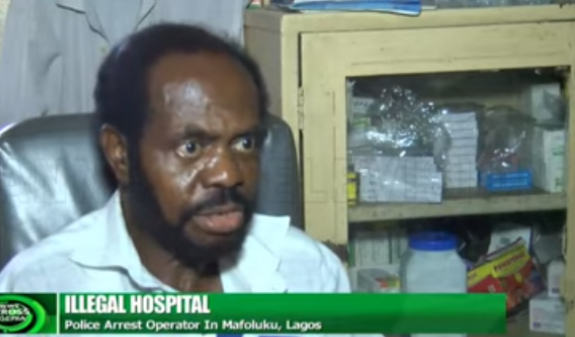 A Ghanaian man, Hayfore Adu-Peprah, who has been operating an illegal hospital in the Mafoluku area of Lagos state has been arrested by the Police.

Adu-Peprah, the hospital operator who reportedly came into Nigeria as a nursing tutor in 1982, established the illegal facility in 1996.

He was exposed when a lady lost her baby after visiting the hospital in September due to swollen legs.

According to the unidentified lady, a nurse in the hospital had told her to go for another scan, which she did.

She said when she came back, one of the nurses directed her to go to a general hospital where she spent two days before she was transferred to Ayinke House Ikeja.

“Two weeks later I came back here to ask the doctor what happened, he said that he knew the baby (of his relative) had died in her womb for 2 weeks but didn’t know how to tell her”.

During interrogation, Hayfore denied taking up the title of a “doctor”.

He also claimed he is suffering from hypertension, diabetes and kidney disease.

He could also not provide the certificate he claimed to have obtained before operating the private nursing home.