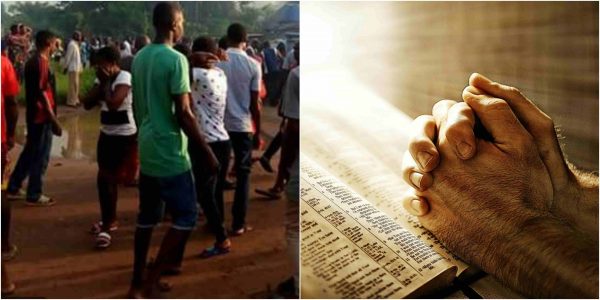 A 46-year-old clergyman identified as Evangelist Chidi Eke has died in the course of fighting for 40 days and nights in Eziala Nguru in Ngor Okpala council area of Imo State.

The pastor was reportedly fasting to seek God’s face as he plans to open his own ministry.

The pastor identified as Chidi Eke reportedly left his wife and children in Lagos after he claimed God called him to start his own ministry, relocated to Imo state where he said he would be seeking the face and power of God inside the ”Wilderness”. He had successfully concluded a 21 days fast and decided to go ahead to do a 40-days dry fast.

According to reports, “During the first and second week of his fast, people who had gone to their farms heard him singing and praying loudly. But after the third week nobody heard his voice again and most people thought that perhaps he must have gone deep into meditation. But one of his church members, one Cyriacus Opara who became worried and insisted that he needed to visit him at the forest.

“When Opara approached the family that he wanted to visit Chidi Eke in the “Wilderness”, they told him that they don’t actually know the exact location where he was and that Eke had earlier issued a stern warning that he did not want any visitors because he had left his phone and money at home and had only gone with his Bible and gown.” a resident of the village told newsmen.

Opara was told to contact one Cajethan Nwaneri as the only person who knew the location of the “Wilderness” since he had assisted the deceased evangelist in clearing it. Nwaneri led Opara to the place where they found out Eke had long died.

“Eke had abandoned his wife and two children, a boy and girl in Lagos and returned back to the village saying that he has come to answer the call of God. His corpse was discovered by one of his members who had gone to check on him in the bush where he had gone.

Eke is the only son of his mother. In fact it was members of the community under the leadership of Tochukwu Ekeh (Angle 90) who are going to bear the burden of burying him” a relative said