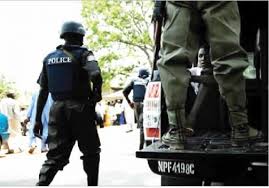 Some police officers have allegedly threatened to deal with a man in Lagos, forcing him to withdraw money for them.

According to a report by SaharaReporters, four policemen in Lagos have been accused of extorting one Kareem Damilari Jamiu of N715,000.

Jamiu, who lives in Sagamu, Ogun State, was arrested on Monday by the policemen.

The law enforcement officials, one of them identified only as Kelvin, were reported to have forced Jamiu to part with the money after arresting and accusing him of being a cultist and Internet fraudster (yahoo yahoo).

They took Jamiu to a school after the arrest was made instead of a police station.

They threatened not to release him until he cooperated and bailed himself.

The policemen initially demanded N105,000 as bail and after paying the requested sum, they demanded that they see his bank account balance, after which, they demanded more money.

“The money was withdrawn at a filling station but they were not satisfied and they asked him to log into his mobile app for them to see his bank balance,” narrated Okechukwu Nwanguma, Executive Director of Rule of Law and Accountability Advocacy Centre, who was familiar with the matter.

Nwanguma added that the officers upon seeing that he still had some money in his account, drove him to Ikeja, somewhere opposite the Police Headquarters where they forced him to release his ATM and to disclose his PIN to them and they used a POS to withdraw the additional sum of N610,000 from his account.

Narrating his bitter ordeal, Jamiu said, “They saw that I had enough money in my account which doesn’t belong to me and they got mad at me and took me back to the POS and withdraw all the money.

“I was shouting at them that the money was not for me, that the 105, 000 wass what I can afford. But they said if I should say anything they would beat me.

Bbeingefore releasing him, the police officers warned Jamiu not to report what happened to anybody or risk killed.

Jamiu’s mother was also threatened by one of the police officers, vowing that Jamiu would be seriously dealt with except he leaves the shore of the country.

RULAAC, a non-governmental human rights advocacy organization committed to promoting rule of law, law enforcement accountability, and transparent and responsible policing, has sent a petition to the Inspector-General of Police, Adamu Mohammed, calling for an investigation into the matter.

Nwanguma said in his t thypreliminary investigation, he called one of the mobile numbers of one of the officers involved in the extortion.

He said, “I called the number and the officer spoke to me admitting that he was in the team that came to arrest the young man but denied using his ATM to withdraw his money using a POZ.

“Shortly after I spoke with the officer, the young man called me and reported that the officer called his mother and threatened to deal with her son for reporting them to a lawyer

RULAAC urged the IGP to “order a prompt, impartial and exhaustive investigation to identify the officers responsible for these rogue activities akin to kidnapping, hostage taking and robbery”.

He also demanded that a full refund of the money extorted from the victim and the officers are “subjected to appropriate disciplinary actions in accordance with the Police Act and other relevant laws.”