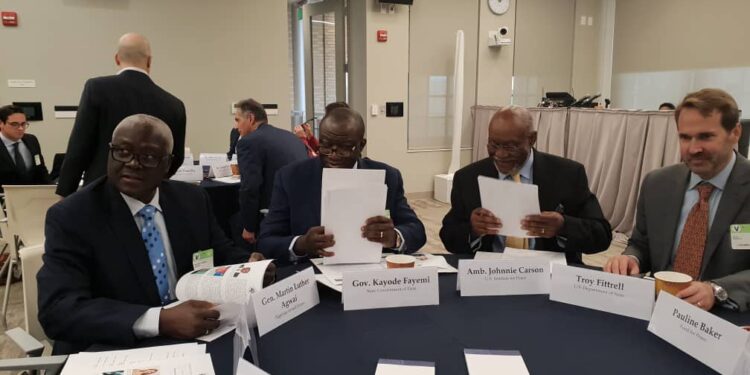 Dr. Fayemi pointed out that democracy goes beyond the right to choose leaders through the ballot, but stimulating civic engagement to better the lives of the citizens.

The Governor stated this on Wednesday while delivering a paper at the United States Institute of Peace, Washington DC, United States.

Governor Fayemi’s lecture, entitled: “Twenty Years of Democracy in Nigeria: Successes and Challenges,” was part of the event, with the theme: “Deepening Democratic Governance in Nigeria.”

Also in attendance were officials of the US Department of State, scholars and members of the civil society.
While noting that Nigeria has made significant progress as a democracy since returning to civil rule in 1999, Dr. Fayemi opined that “dfemocracy is a journey and not a destination,” hence the need to address imbalances in the Nigerian federation.

He maintained that a fundamental restructuring of the Nigerian federation is an “unavoidable step for the creation and sustenance of a participatory, consensus oriented, accountable, responsive and equitable national governance based on respect for the rule of law.”

The Chairman of the Nigeria Governors’ Forum explained that his party, All Progressives Congress, included restructuring in its 2015 and 2019 manifestoes and has been working towards it in a bid to use its platform to address the perceived structural imbalance.

The restructuring, Dr. Fayemi said, must address issues like writing the people’s constitution and the question of constitutional governance, the fundamental precepts of authorising principles of national togetherness, citizenship and national question, the political economy of federalism including the allocation of public revenue, security sector governance, human rights, social justice, electoral system, type of government-parliamentary or presidential, among others.

While urging the Nigerian populace to show more interest in governance and hold their leaders accountable, Dr. Fayemi stated: “An indifference might be dangerous for democracy”as Democratic institutions cannot be strengthened in a climate of of apathy and clinical disengagement.

“The current phase of the struggle is therefore not just about maintaining the sanctity of the ballot but also holding those elected accountable and stimulating civic engagement in the public realm, in a way that democratises ownership and improve the quality of life of our people.

“We must banish the idea that governance is something performed by a team of gifted performers or strong men, while the rest of the citizens are spectators or complainers.”

Ambassador Johnnie Carson of the USIP and Agwai led the discussion session after the Governor’s presentation.