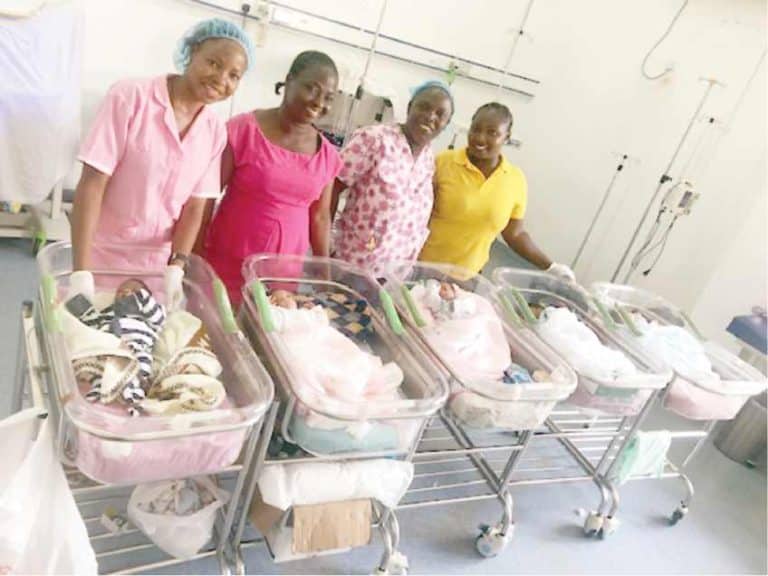 44-year-old Susan Egenti, has reportedly put to birth to quintuplets after 16 years of marriage. She was delivered of the babies at the Federal Medical Centre, Jabi, Abuja.

Mrs Susan Egenti an indigene of Nando, in Anambra East Local Government Area of Anambra State was delivered through a caesarean section on November 6, 2019. The quintuplets three boys and two girls were still in the Intensive Care Unit (ICU) of the hospital when our reporters visited on Thursday afternoon, though the nurses looking after them said they were hale and hearty.

They stated that four of the babies were born healthy, measuring the average weight of a newborn, except one who was underweight and was weighed 1.9 Kg. Speaking to Daily Trust on Saturday on her hospital bed, Mrs Egenti said within her 16 years of marriage, she had taken all medical options (except IVF) to get a baby but to no avail until she had the quintuplets.

She said she resorted to traditional/herbal remedies to conceive a child but that was also futile, leaving her in perpetual despair. She described the birth of her babies as an enormous blessing from God as it was her first and only pregnancy since she got married in 2003. “I have been married since 2003 with no children, not even to get pregnant and have a miscarriage. Every time we attend a child dedication either in our church or elsewhere, I always come home crying, praying for the day God will have mercy on me and grant me the fruit of the womb.” She narrated that the birth of the babies almost took her life as she underwent two different operations, after the delivery, to stop the internal bleeding she suffered.

She stressed that the last operation one left her in a coma for about five days. Mrs Susan who lives with her husband in a room self-contained apartment in Utako village says she sells plastic containers while her husband manages a small chemist at Jabi park.

According to her, she has spent all her meagre resources on medical expenses and as such, they are left with nothing to cater for the five children, calling on Government and philanthropic Nigerians to assist them.

Her husband, Mr Emmanuel Nnamdi Egenti, who also spoke to our reporters at his one-bedroom accommodation in Utako village, an urban slum in the heart of Utako District, expressed joy over the birth of his quintuplets, saying even during their years of childlessness, they had never given up, but rather, put their hope in God, as there was nothing he could do.

However, he said they were yet to pay for the hospital bills even though the babies have been discharged but their mother is very ill and can’t even stand on her feet. He prays for the government’s intervention to enable then take care of the babies, adding that they would not be having any more babies in the future.

“We are grateful to God for what he has done for us. He has proven that He is the one and only true God, who answers prayers of those who call on Him,” he said, stressing that the because they were poor, the prospect of looking after the children in terms of feeding, clothing, education and healthcare was so bleak that their joy at having the babies was almost, immediately, turning into despair and despondency.

Dr. Tochukwu Nwoye, the medical doctor who led a team of doctors that carried out the operation, was not on seat when our reporters visited the hospital. The new mother of five who couldn’t hide her despair on how to foot the bills and subsequently take care of her new bundle of joy was kept in a semi-private ward away from her babies as she was still recuperating from the operations.