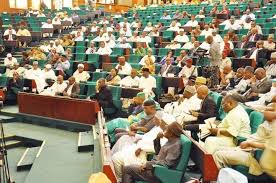 The House of Representatives has urged the Central Bank of Nigeria (CBN) to penalize commercial banks that fail to convert all casual workers to permanent staff without delay.

The Green Chamber urged all commercial banks to convert all casual workers to permanent staff.

The resolutions followed the consideration of motion moved by Amobi Akintola (APC, Osun) during Wednesday’s plenary.

According to Akintola, most of the banks are raking in billions as profit but equally continue to casualize workers.

Akintola explained that “prior to the emergence of new generation banks in Nigeria, staff of banks were usually full time workers and entitled to series of benefits from the banks they worked for, including promotions, health packages, productivity, life insurance policies, housing allowances, wardrobe allowances, feeding allowances etc. which made banking jobs enviable work for all and sundry in the country;

“That with the advent of new generation banks in the country, so many things changed in the banking industry but despite all the challenges being faced by the new generation banks, the financial sector still remains one of the most viable sectors of the Nigerian economy with each of the banks having a minimum of twenty-five billion naira only (N25, 000,000,000) as its capital base.”

“Commissions and charges that banks had raked in as at September 30, 2019 were over seven hundred billion naira (N700,000,000,000), without considering money generated from loans, advances and other portfolio investments of the banks, evidencing the lucrative nature of banking business.”

The lawmaker linked uptick in fraud in the banking sector to the casualization of workers in the sector.

“Despite the huge profits being made by commercial banks, they still casualize most of their core operational staff, as (90) percent of bank workers are casual staff, a development that is an act of exploitation of the unemployed youths;

“Core operations of banks like tellering customer service, relationship management, marketing, business development, internal controls etc are being handled by contract staff who are not entitled to promotion, health care services, utility allowances, productivity etc, thus making them to be virtual slaves within the banking sector as six months ago, Eco Bank laid off over a thousand casual staff;

“The practice of casualization of staff is causing a rise in fraud rate perpetrated by staff and also psychological trauma among those set of staff to the extent that a contract staff committed suicide in 2010 when he was retrenched by WEMA Bank without any compensation and in another incidence few days ago, during a robbery attack in Ekiti State on Thursday November 21, 2019, the Police explained how a CCTV footage exposed a bank staff involved in the robbery operation.”