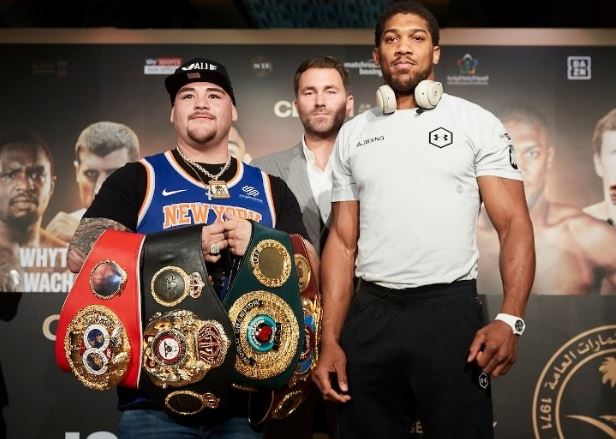 This was the most Ruiz has weighed since he came in at 292½ pounds for his second pro fight in June 2009.

A noticeably lighter Anthony Joshua indeed weighed in at 10-plus pounds less Friday for his rematch against Andy Ruiz Jr. than he did for their first fight. England’s Joshua officially came in at 237½ pounds for their second bout, set for Saturday night in Diriyah, Saudi Arabia.

The 6-feet-6 Joshua weighed 247¾ pounds the day before Ruiz upset him by seventh-round technical knockout June 1 at Madison Square Garden in New York.

The 6-feet-2 Ruiz officially weighed in at a whopping 283½ pounds Friday, 15½ pounds more than he was when he weighed in for their initial encounter six months ago. Ruiz weighed 268 pounds for their first fight.

This was the most Ruiz has weighed since he came in at 292½ pounds for his second pro fight in June 2009.

READ  Pastor Evans Reveals What Anthony Joshua Must Do To Avoid Another Shock Of Defeat In December
Share this Post[?]