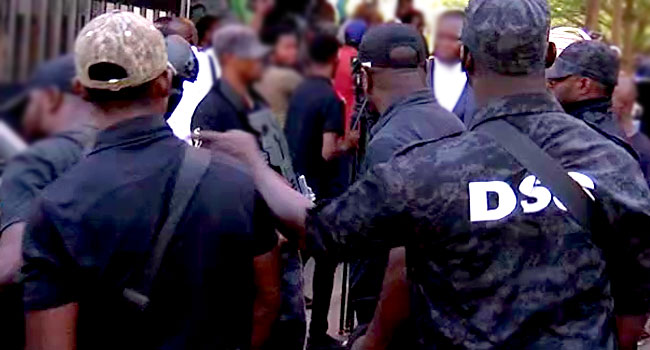 The National Human Rights Commission (NHRC) has called for the arrest and subsequent trial of operatives of the Department of State Services (DSS) and other security officials involved in the invasion of the Federal High Court in Abuja.

The Executive Secretary of NHRC, Tony Ojukwu, made the call in a statement on Saturday barely a day after some DSS operatives stormed the court.

“The Commission directs all the relevant agencies of government to arrest and try all law enforcement officers involved in the desecration of the hallowed chambers of the Federal High Court Abuja on Friday 6th Dec 2019 for contempt in the face of the court.

“They should be tried, and this should serve as a reminder to all law enforcement agents that they must obey the law in carrying out their law enforcement duties,” he said.

Ojukwu added, “They must enforce the law within the law.

“Impunity by law enforcement officials cannot be indulged in our democracy because impunity uproots the very foundation of our constitution and our democracy.”

The NHRC boss said the commission watched with dismay the conduct of law enforcement officers in the court and condemned it in its entirety.

He reiterated the need for law enforcement officials to understand that to qualify as law enforcement agents, they must first of all be law-abiding and not be above the law.

According to the NHRC boss, as officials paid with taxpayers’ money, there must be no room for impunity and utter disregard for the constitution.

“Our democracy is founded on the principle of separation of powers and all citizens including law enforcement officials must understand the implications of that and are enjoined to respect the law and the constitution in the enforcement of the law,” he stressed.

The statement came a day after DSS operatives in at least three pickup trucks stormed the court on Friday to re-arrest Mr Omoyele Sowore who had just been released two days ago.

However, the attempt to make the arrested inside the court was resisted by Sowore and his supporters while a scuffle ensued between both sides.

Sowore’s lawyer and Senior Advocate of Nigeria, Mr Femi Falana, who was part of the group that confronted the security operatives informed them that such an operation cannot be carried out in court.

Thereafter, he asked the DSS operatives to go out of the court premises after which he drove Sowore in his vehicle to the DSS office where he was re-arrested and detained.