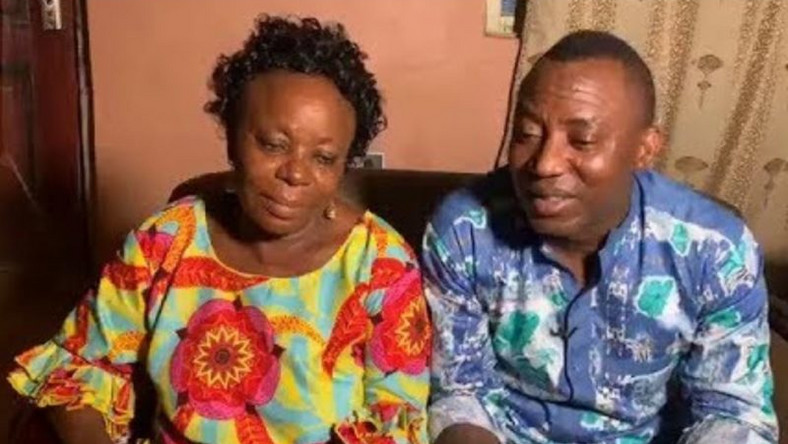 Mother of Omoyele Sowore, Esther, has made a passionate appeal to President Muhammadu Buhari, his wife Aisha, and other leaders to compel the Department of State Services (DSS) to free her son.

She made the appeal just as a former Police Commissioner, Abubakar Tsav, the All Progress Congress (APC), the Socio-Economic Rights and Accountability Project (SERAP) and a Senior Advocate of Nigeria, Femi Falana, expressed diverse opinions on the Sowore saga.

She said: “I am begging Buhari in the name of Allah to release my son. It has affected my health. Release my son for me; it is time to release Omoyele. Enough is enough. Aisha help. Everyone is preparing for Christmas and New Year. If not for his detention, my son would by now be preparing to go to the village to meet me and everybody in the village.

“Everybody is waiting for him in the village. I am now pleading with President Buhari to help me release him. I mean, fully release Sowore. It should be 100 per cent release.

“I am inviting all the leaders – Tinubu, Soyinka and the Vice President to intervene and help release Omoyele Sowore. He is not a criminal; he is a man of God. I know my son; my son loves everybody.”

But Tsav, who served as a police commissioner in Lagos State appeared to have countered Sowore’s mother when he said on Sunday: “If I were President Buhari, I would have taken a sterner step on him than what he is doing now

He stated that the Presidency was justified in likening Sowore’s case to that of the leader of the Indigenous People of Biafra, Nnamdi Kanu.

Tsav argued that Sowore committed a grave offence by planning to stage a revolution after contesting and losing the last presidential election.

This, he said, implies that he wanted to govern Nigeria by force.

The former police boss said: “As somebody that was involved in law enforcement for 35 years, I will tell you the action and utterances of Sowore are very dangerous. They have serious consequences for the country. This is because he contested an election and lost and the next thing we are hearing is that he wants to stage a revolution. That means he wants to govern the country by force.

“If I were him, I would have kept my mouth shut and comply with the conditions of his bail. But he did not do so. So, if I were President Buhari, I would have taken a sterner step on him than what he is doing now.”

SERAP however faulted the Presidency for comparing Sowore with Boko Haram militants.

It said: “It is unacceptable to compare citizens who are also activists simply exercising their human rights including freedom of expression with militants who are killing our people and destroying property.”

The group said what was happening to Sowore and his co-accused, Mr. Olawale Bakare, showed clear attempts to further silence critics, activists and the media while the Federal Government continued to undermine the rule of law and the independence of the judiciary.

The group tweeted: “We condemn the statement today by @NigeriaGov issued by Garba Shehu, Senior Special Assistant (Media and Publicity) to President Buhari, which seems to compare Sowore and Bakare to Boko Haram militants. To be absolutely clear: Sowore and Bakare are not terrorists.”

Also on Sunday, the ruling APC accused former Vice-President Atiku Abubakar of spreading falsehood about the event leading the re-arrest of Sowore.

Its National Publicity Secretary, Mallam Lanre Issa-Onilu said in a statement that Nigerians should be wary of people who are bent on bringing the country down at all cost.

The party called on Atiku to apologise to Nigerians for misinforming them about what happened.

The statement reads: “Following the recent court drama that greeted the resumed trial of the convener of #RevolutionNow, Mr. Sowore, the PDP and its defeated presidential candidate, Alhaji . Atiku Abubakar have typically chosen to present and spread their concocted “alternative facts” and lies on the incident.

“The party will not be drawn into arguements over the powers of the DSS to arrest and re-arrest Sowore over his actions and utterances. The constitutional mandate of the DSS already addresses that.

“Also, the Presidency has clarified that the DSS does not necessarily need the President’s permission in all cases to carry out its essential and constitutional responsibilities.

“Again, whether Sowore flouted any of his bail conditions or staged the incident in court is another matter which the court and prosecuting agency should address.

‘Atiku in his horrid statement particularly accused the DSS of attacking the presiding judge among other lies being chorused by the PDP and their hirelings. Documentary evidence such as videos and pictures have shown that the tales are a complete ruse until anyone is able to present a contrary evidence.

“If Atiku’s intervention was sincere, having realized the truth, he has not deemed it proper to apologise to Nigerians for misinforming them on the incident. Instead, he hangs shamelessly on lies. A commentator has correctly described Atiku as “the king of the bandwagon.”

Meanwhile, Sowore’s lawyer, Mr. Falana, has described as contradictory, the statement by the DSS on Friday’s incident.

He said the DSS made an unsuccessful attempt to absolve itself of responsibility “for the armed invasion of the Federal High Court, Abuja” and “the desecration of Court No 7.”

Besides, he said Sowore’s re-arrest was illegal.

“Having declared that the service arrested Sowore ‘outside the court’, despite the ‘stage-managing’ argument, what the Nigerian people want to see happen is the immediate release of Sowore, pending his trial as ordered by the court,” Falana said.

Falana said the facts show that the DSS was solely responsible for the desecration of the hallowed chambers of the court.

He added,“When I informed the court that fresh charges were being filed against our clients and that they could be re-arrested, the prosecution denied any such plan.

“As soon as the case was adjourned the SSS pounced on Sowore and caused a disruption of the proceedings of the court.

“Having taken over the courtroom vi et armis (trespass with force), Justice Ijeoma Ojukwu hurriedly rose and asked the Registrar to adjourn all other cases.”

Falana said the DSS officers were identifiable by their roles and acts of seizing Sowore and pinning him down.

He added, “It is utter poor reasoning to say that Sowore’s supporters were also those bent on injuring him in order to arrest him.

“The argument of the service in this respect is as unfortunate and pitiable as the earlier argument of the Service in respect of the Late Chief Gani Fawehinmi who was once accused of wanting to set ablaze his own house.”

Arguing that the DSS did not inform the court that Sowore flouted his bail terms, .he demanded his release.