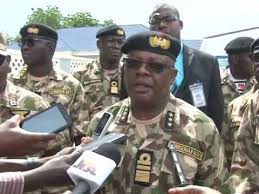 The Chief of the Naval Staff (CNS) Vice Admiral Ibok-Ete Ibas on Monday laid the keel for the construction of a warship, Landing Ship Tank (LST) 100 to boost the Nigerian Navy’s (NN) sealift capability.

The keel laying ceremony which took place at the DAMEN Shipyard Sharjah, in the United Arab Emirates (UAE), came 41 years after the federal government purchased two German 502 Amphibious vessels- NNS AMBE and NNS OFIOM which were decommissioned over 10 years ago.

A troop carrier, The Nation reports that LST 100 would in no small way aid naval operations at sea because aside its unique combat strength, the warship has the ability to lift battalion of soldiers and heavy equipment at a go.
Laying the keel, the CNS said it was a significant step towards actualising the dream of restoring NN’s sealift capability since the decommissioning of NNS AMBE and NNS OFIOM.

“These vessels served the Navy meritoriously in the 1980s-90s, playing significant roles during the ECOMOG intervention operations in Liberia and Sierra Leone, as well as other peace support operations in Lebanon.

“The NN’s acquisition of this LST 100 will certainly go a long way in filling the operational gap created by the decommissioning of the two NN ships.

“The LST, when completed and delivered, is expected to play crucial roles in the security of Nigeria’s maritime environment and beyond. Specifically, the ship will be engaged in the protection of maritime resources and the preservation of law and order at sea, thus contributing significantly to promotion of global maritime commerce and maritime power projection in Nigerian Maritime environment and the Gulf of Guinea (GoG) at large.

“It is therefore my fervent belief that this shipyard will complete the construction of the LST with all the attention and due diligence that it deserves, to rekindle our historic relationship and pave way for other areas of collaboration in the future,” he said.

Congratulating DAMEN Shipyard for winning the bid for the construction of the ship, Ibas noted that Two NN Tugboats DOLPHIN RIMA and DOLPHIN MIRA built by the firm were still operational and in service on the navy’s fleet.

“The selection of DAMEN Shipyards to execute the project was based on its track record of high-quality shipbuilding capacity, engineering as well as a belief in the company’s ability to adhere to the timeline for delivery of the ship.

“Cognizant of your pedigree and experience over the years, the NN is confident that you will not only build this ship in line with the specifications and configuration to the highest standards but also deliver the project on schedule. Timely delivery is not negotiable.

“On this note, I would like to thank the President and Commander in Chief of the Armed Forces of the Federal Republic of Nigeria, President Muhammadu Buhari, for his untiring support for the rejuvenation of the NN fleet since assumption of office.

“The NN and indeed the government and good people of Nigeria look forward to a masterpiece that will reflect the best skill as well as the highest standard of engineering, safety and observance of timeliness in the construction of the LST,” he said.