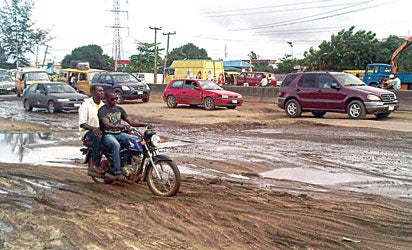 The Federal Government has appealed to Nigerians to be patient and show understanding over the current state of roads across the country, assuring that a lot is being done to ease the plight of road users.

Works and Housing Minister, Babatunde Raji Fashola, made the appeal when the Executive and Trustee members of the Public Transport Owners of Nigeria Association (PTONA), paid him a courtesy visit in his office.

According to the Minister, “the entire transportation network of road, sea and air is important to the government and the President. We have been having meetings with various stakeholders in the transport sector to make life easier for the people.”

He added that, “we met with our contractors and work is ongoing in many roads. There is a distance between approval and construction of roads, by the time all these work is completed all we are saying will be a thing of the past, please be patient.”

Earlier, the leader of the delegation Engr. Isaac Uhunmwaghu, disclosed that all major transport owners belong to the association which he said was formed to work closely with government to make life easier for road users.

In his words, “we in PTONA thoroughly appreciate you (Fashola) for what we know about you in the past 12 years. We are however sad that despite all your efforts and best intentions, the perception by Nigerians about travelling on the road is extremely negative presently.”

He attributed the negative perception to insecurity and bad roads.

Uhunmwaghu assured of the support of his association for the recent demand by the Minister for additional funding of N255.6 billion for construction of roads.

The group also expressed their support for the re-introduction of tolls on all highways in the country, adding that “toll gates will not only generate virtually all the funds for roads construction and maintenance but have punitive charges for excessive load carrying vehicles responsible mostly for the quick destruction of our roads”.

He urged the Minister to give special attention to the following roads: Lagos- Abuja, Lagos-Port-Harcourt, Port-Harcourt to Abuja and Abuja to Kano road.