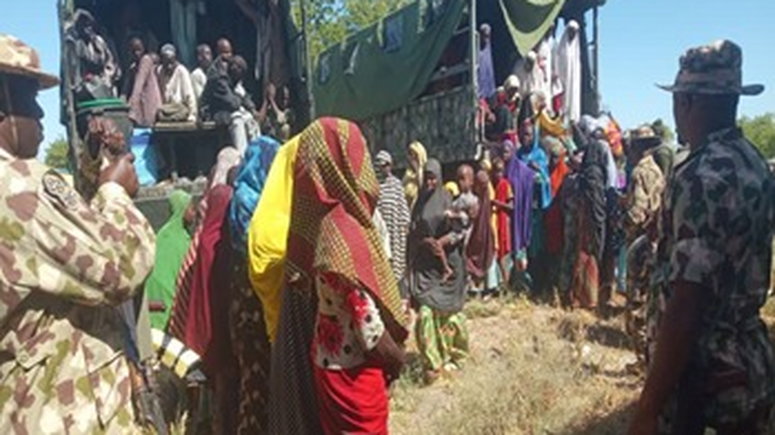 The Nigerian Army says its troops have neutralised and captured more Boko Haram/Islamic State of West Africa’s Province terrorists and rescued 165 women and children from their captivity in Borno State.

The Nigerian Army Operations Media Coordinator, Col. Aminu Iliyasu, in a statement on Thursday in Abuja, said the operations were carried out in conjunction with the troops of Multinational Joint Task Force.

Iliyasu said the troops of Nigerian Army Super Camp 7 deployed at Bama area of the state killed one terrorist, captured one alive and rescued eight women and six children at Tafana 1, 2 and 3 villages in Bama on December 27, 2019.

He disclosed that the rescued children were immediately administered with Polio Vaccines.

According to him, troops also captured Boko Haram flags, recovered 16 arrows and 32 refilled rounds of 7.62mm Special ammunition during the encounter.

Iliyasu also disclosed that troops of 25 Task Force Brigade deployed at Super Camp 2 in Damboa, arrested a high profile Boko Haram informant/logistics supplier, Ibrahim Buba, and two others suspected to be his couriers at Shuwari village in Damboa District.

He added that troops of 242 Battalion in Monguno arrested suspected terrorists’ logistics suppliers, Abubakar Aisami and Modu Baba, with foodstuff and drugs concealed in a bag of smashed corn powder for delivery to the terrorists.

Iliyasu further disclosed that the troops of Sector 3 Mobile Team in conjunction with elements of Sector 2 Multi-National Joint task Force recovered and destroyed 15 vehicles belonging to the Boko Haram terrorists in northern Borno.

He added that the troops also arrested 75 suspected Boko Haram agents and rescued 147 civilians comprising 79 males and 68 females who had been under the captivity of the terrorists.

According to him, the rescued civilians were conveyed to a humanitarian facility in Monguno and thereafter handed over to officials of Borno State Emergency Management Agency.

“The children among them were administered with polio vaccine by the Buratai Intervention Task Force Initiative,” he said.

Iliyasu further disclosed that the Nigerian troops of 35 Battalion in Katsina State in conjunction with the State Amnesty Committee, had achieved a milestone in addressing the menace of banditry in the state.

In Zamfara State, he said the troops of 8 Division neutralised bandits and recovered one AK 47 Rifle loaded with 13 rounds of 7.62mm Special ammunition and rustled animals.

“Also of significant note, troops of 1 Division Garrison on December 25, 2019 during security patrols arrested one Mr Moses Ali with a locally made gun loaded with 9 rounds of 7.62mm Special ammunition at Ningon Gari in Sanga LGA of Kaduna State.

“The same gallant troops arrested seven suspects during a Cordon and Search operations conducted at 13 settlements of Kuyeri Mountains along Jere – Kagarko Road in Kagarko LGA of Kaduna State,” he said.

He added that the Chairmen of Langtang North and South Local Government Areas handed over recovered weapons and accessories from repentant militias to the troops of Nigerian Army Forward Operational Base, Shendam on December 24.

“This landmark submission of arms and ammunition portend great prospect for a reign of peace and security on the Plateau and its adjoining environs.

“The Chief of Army Staff, Lt.-Gen. Tukur Buratai has commended personnel of the Nigerian Army for the successes so far recorded throughout the Year 2019 in Operation LAFIYA DOLE and all other operations across the Country.

“He assures them of improved welfare in the Year 2020 and further commends Field Commanders and Principal Staff Officers as well as other officers and men for their efforts in implementation all strategic directives in the preceding year,” he said.