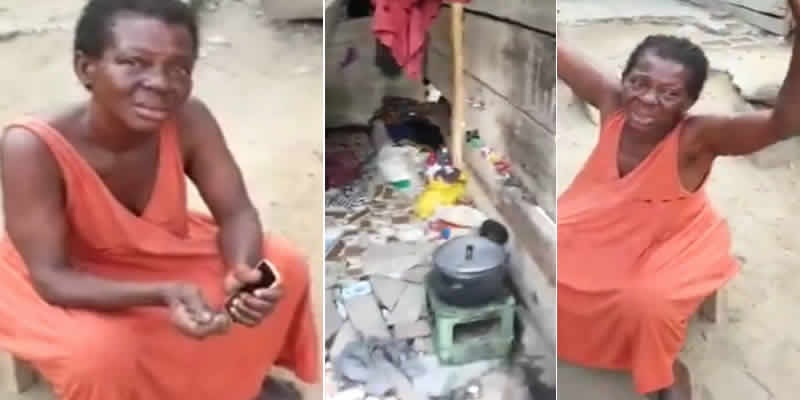 A Nigerian woman identified as Esther Aiworo who is currently in a sorry and disturbing state has appealed to Edo billionaire, Cacudu Benson to assist and rescue her from the pangs of death.

This appeal was made by Esther Aiworo in a video filmed by a yet-to-be identified woman where she disclosed that she is the first wife of the Edo billionaire and allegedly had three children for him.

Cacudu Benson is an Edo Billionaire, socialist and the owner of Royal Maple hotel in Benin City.

The mother of two boys and one girl alleged that Cacudu Benson took her children to America while he left her in Nigeria to wander.

Inside four-minute video, the yet-to-be identified woman filming the video can be seen lamenting about the poor state of the house the woman lives.

She revealed that she is planning to send the woman out of her compound because she does not want troubles for herself if something bad happens to the woman.

The self-acclaimed first wife of Cacudu Benson can be seen crying profusely as she requested that the doors of her room should be open for people to see where she lives. It was an eyesore.

According to the woman filming the incident, she disclosed that the present residence of the woman was given to her by a person who lives in her compound and emphasised on the disturbing and pathetic state of the woman.

“She sells used bottles for survival. She is terribly sick and can not work fine. It is unbelievable, a rather sad interviewer said.

When asked to convey a message to Cacudu Benson, the sick, sad and pathetic woman said ” Friday Ogbor Aiworo, I love you. You are the father of my children. Inspite of all what you do to me, I still love you. No matter the situation, I love you. Come and take me out of here. I am suffering at the moment. Help me please.

The woman who filmed the self-acclaimed wife of Cacudu Benson disclosed that she hurriedly came to see the woman when she heard about her condition. Why should someone leave anybody in this state especially a woman? Cacudu Benson is a socialite and well known man. He should find something pleasant to do about it, she said.