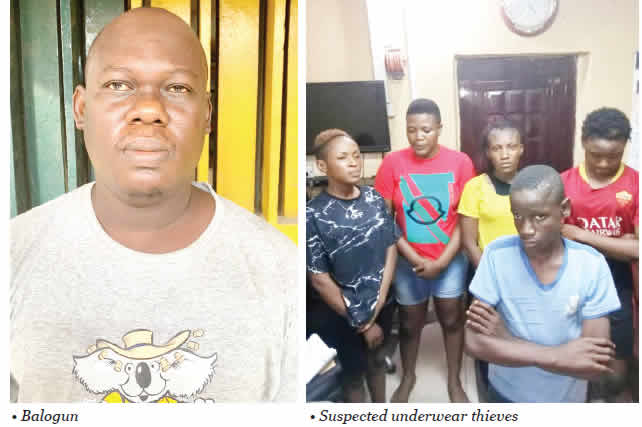 A car wash operator, Sheriff Balogun, has been arrested for allegedly killing his neighbour, Peter Elebo, during a fight over the time to close the gate of their place of residence at No. 32 Ola Street, Itire, Lagos State.

The state Police Public Relations Officer, Bala Elkana, said in a statement on Sunday, that during the fight, Balogun pushed Elebo to the ground, adding that the latter started vomiting blood and died on the spot.

He stated that the deceased’s daughter, Faith, reported the incident at the Itire Police Division, where personnel were mobilised to arrest Balogun, adding that the case had been transferred to the State Criminal Investigation and Intelligence Department, Panti, Yaba, for further investigation.

He said, “On Saturday, January 11, 2020, around 7.20am, one Faith Elebo, of No. 32 Ola Street, reported at the Itire Police Station that around 1.30am, one Sheriff Balogun, 35, who lives in the same compound with them, had a fight with her father, Peter Elebo, about when to close the compound’s gate.

“Sherif Balogun pushed down Peter Elebo, who started vomiting blood and died on the spot. Homicide detectives led by the Itire Divisional Police Officer, SP Barkfur Kromkyes, visited the scene. The corpse of the deceased person was evacuated to the mortuary for autopsy. The suspect was arrested and transferred to the State Criminal Investigation and Intelligence Department, Yaba, for discreet investigation and prosecution.”

In another development, a mentally-ill man, Badejo Adewale, has allegedly set one Bolatito Kadara ablaze on Hogan Bassey Street, in the Surulere area of the state.

Elkana said the victim was taken to hospital for treatment, adding that Adewale was taken to a psychiatric hospital in Yaba and that efforts to interview him proved abortive as he did not utter a word.

He stated, “On Thursday, January 9, 2020, around 7.08am, one Adeola Kadara of No. 13 Aiyeleto Street, Surulere, reported at the Surulere Police Station that she received an information that on Wednesday, January 8, 2020, her brother, Bolatito Kadara, was set ablaze on Hogan Bassey Street, Surulere, and was taken to the Lagos Island General Hospital. Police detectives visited the scene and proceeded to the Lagos Island General Hospital, where the victim was seen recuperating.

“He made a statement to the police and narrated how one Badejo Adewale, who is mentally-ill, poured petrol on him and set him ablaze. Investigation was extended to the psychiatric hospital in Yaba, where the suspect was admitted. Efforts made to interview him proved abortive as he could not utter a word. Investigation is ongoing.”

Elkana said the stolen pieces of underwear were being used for ritual purposes, adding that the suspects had confessed to stealing them and they would be charged for the crime.

The PPRO stated, “On January 10, 2020, around 8am, acting on information, operatives from the Ojo Police Station arrested one Chukwajekwu Eziigbo, 15, of the Ilufe area of Ojo, for stealing female underwear from the clothes lines. The suspect confessed that for one year now, he had been stealing female underwear from different houses in Ojo and environs.

“The suspect said he usually hand over the stolen underwear to the following female suspects in exchange for money: Chidinma Obietuake, 17; Chikwaka Jemfe, 17; Gold Enyinnaya, 23; and Amarachi Akomas, 26, all of the Ilufe area, Ojo.

“The suspects have been arrested and they confessed to the crime. Detectives recovered some stolen female underwear from the suspects. An investigation is ongoing and the suspects will be charged.”

In another development, an undergraduate, Chukwuemeka Obasi, was rescued from committing suicide at his parents’ house in Ejigbo, Lagos.

Elkana said the prompt response of the personnel of the Ejigbo Police Division prevented Chukwuemeka, who had tied himself to a ceiling fan in the living room, from killing himself, adding that he wanted to perform the act because his parents scolded him for wrongdoing.

He stated, “On January 7, 2020, around 8.29am, an officer of the Lagos State Neighbourhood Safety Corps alerted the Ejigbo Police Station that a young man, Chukwuemeka Obasi, 21, of No. 4 Alaba Street, Last bus stop, Ejigbo, a student of the University of Nigeria, Nsukka, Enugu campus, tied a rope in a loop around their living room’s ceiling fan in preparation to commit suicide, because he was scolded by his parents.

“The swift response by operatives from the Ejigbo Police Station prevented him from killing himself. He was rescued and taken to hospital. An investigation is ongoing.”

Meanwhile, one Sodiq Olowolayemo has been arrested for allegedly robbing and terrorising residents of the Bariga area of the state.

Elkana said Olowolayemo, in connivance with one Moses Bamidele, robbed one Jude Saka of his Bajaj motorcycle in Bariga, adding that Bamidele had also been arrested.

“Olowolayemo has been on the police wanted list for a series of traffic robberies and cult violent attacks in Bariga. The state Commissioner of Police, Hakeem Odumosu, has ordered that he should be transferred to the SARS for further investigation and diligent prosecution,” the PPRO stated.

Also, a 22-year-old mentally-ill woman, Chinyere Christopher, who was misbehaving along the Itowolo Road in Ikorodu, was rescued from an uncompleted building and taken to hospital in the Owode Onirin area of the state for medical attention.

Elkana said, “In her lucid period, she was able to give her name as Chinyere Christopher. She equally gave details of her parents, who were contacted accordingly. She is confirmed to be a psychiatric patient from Akure, Ondo State.

“She was eventually moved to Akure for the continuation of her psychiatric treatment and rehabilitation.”