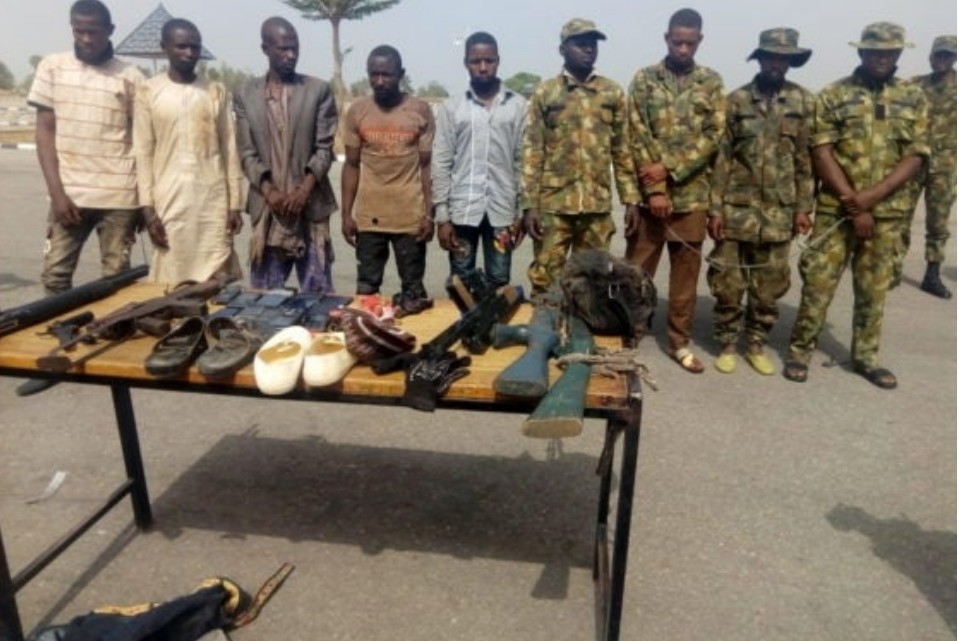 Nigerian Navy School of Armament Technology, says its operatives had arrested no fewer than nine suspects involved in kidnapping, cattle rustling and banditry in Kaduna State.

The school also said 28 kidnap victims were rescued in the operation.

The Commandant of the School, Rear Admiral Tanko Pani made the disclosure while handing over the suspects to the Department of State Services (DSS) on Tuesday in Kachia.

Pani said the arrest followed four months surveillance of suspected dangerous criminal syndicates operating in Kachia and other parts of the State.

He alleged that they were “responsible for various criminal activities such as kidnapping, armed banditry and cattle rustling in Kachia and other parts of the State.

“Various items were recovered from them which include weapons, motorbikes and military camouflage uniforms, amongst others, which they use for their operations.”

He explained that victims that were unable to meet the demands of the suspects were either killed, maimed or injured, while some of the female victims were raped.

The commandant, who handed over the suspects to the DSS, assured that the Navy would continue to collaborate with other security agencies to protect lives and properties of citizens.

“However, we appeal to members of the public and community leaders to assist with credible information about the disposition of criminals in their domain to enable us protect them better.

“We want to further assure the populace that justice can be delayed but not denied as manifested in the arrest of these criminals.

“The public should not be intimidated by the threats of these criminals which are intended to discourage them from giving information to security agencies, as this is what the criminals aim to achieve by instilling fear in them.”

Pani cautioned those giving support to criminals, saying they would be fished out and prosecuted.

“We must, therefore, work collectively to ensure that we put criminals out of business by denying them freedom of action.”

The Commandant stressed that criminals in the state would have no hiding place, saying “we shall locate them and flush them out.”