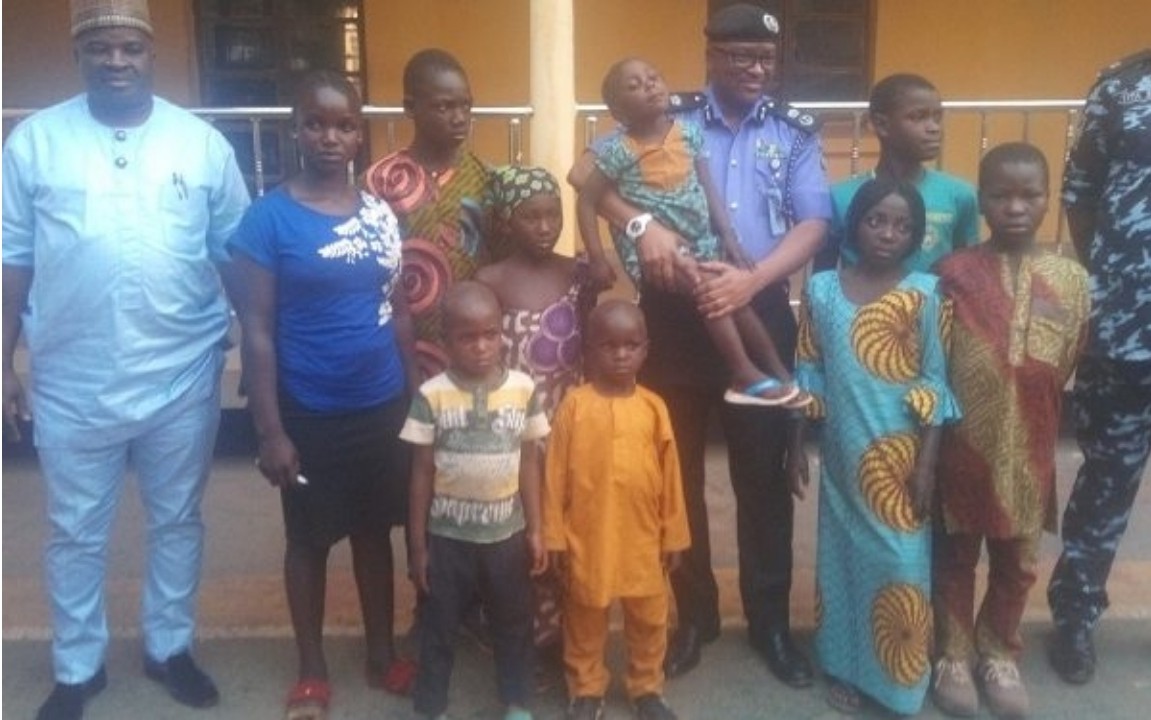 The Police Command in Enugu State at the paraded two suspected child traffickers who were said to specialize in trafficking children from Plateau State in North Central zone to Rivers State in South-South zone of Nigeria.

Enugu State Commissioner of Police, Mr Ahmed Abdurrahman, who paraded the suspects before newsmen, said that the suspects were intercepted trafficking nine children on January 4 in a luxury bus coming from the Northern part of the country.

Abdurrahman explained that they were intercepted at Orba Check-point in Udenu Local Government Area of the state by the army on “Operation Atilogwu Udo 1’’ exercise.

The commissioner said that the army authorities, however, handed over the victims [children] and suspects to the command for further investigation.

A total of nine children, comprising four girls and five boys aged between two and 13 years, he said, were recovered from the suspected child traffickers.

According to him, the suspected child trafficker, 40-years-old Mrs Rebecca Nwachi, who is from Kogi State but married in Ebonyi was moving with the children in the luxury bus before the interception by the army.

“We also have another suspect, Pastor Isaac David, who arranges the children being trafficked for Nwachi from Barkin Ladi council area in Plateau State.

The commissioner, however, said that the police was still tracking the end receiver of the trafficked children, one “Blessing’’ who allegedly runs an orphanage home in Port Harcourt, Rivers State.

Abdurrahman said: “This is a type of organised crime where children are trafficked from the Northern part of the country to the South-East and South-South. This syndicate runs their illegal business using orphanage as a cover-up.

“We have reached and contacted the parents of the trafficked children and some said that they gave their children to the pastor on condition that he will provide better welfare and education for them.

“Some other parents said that they did not know when their children moved out of their homes and they have declared them missing for some time now.

“While at the end receiver’s point, only God knows what these children are used for; some might be used as sacrificial lambs, child labour; and others subjected to a lot of criminal activities. Parents especially people in Plateau State should be wary of the whereabouts of their children. Parents should endeavour to take care of their children themselves.”

The commissioner said that the children would be handed over to their parents after investigation on the matter is over.”

But , the suspect, Mrs Rebecca Nwachi told reporters that she was not into child-trafficking but a missionary based in Barking Ladi.

She said has been sending under privileged children to an orphanage in Elelenwa, near Port-Harcourt, Rivers State for over ten years.

She said the orphanage was well-registered at the Corporate Affairs Commission where children of less privileged families are taken care of.

“If you google our Orphanage, you may read about our organization. We’re not into what the police and army are accusing us of,” she told reporters.