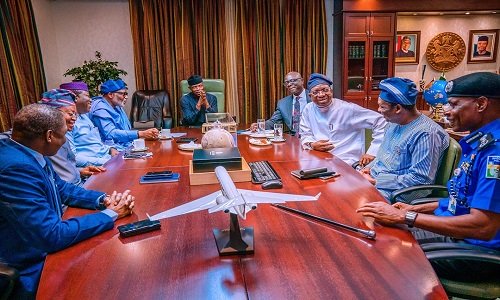 The Western Nigeria Security network Operation Amotekun has come to stay following a deal on Thursday between the Federal Government and the Southwest governors.

Both parties have agreed on way forward for the security outfit launched on January 9 by the governors in response to security challenge in the region.

The Federal Government on January 14 declared the security outfit illegal, a declaration which leaders in the zone rejected.

The states will also give legal backing to the security outfit.

Vice President Yemi Osinbajo presided over the meeting attended by Attorney-General and Minister of Justice Abubakar Malami, and Inspector-General of Police Mohammed Adamu on the side of the Federal Government at the State House, Abuja.

The Vice President, in a statement by his spokesman Laolu Akande, said “the meeting was very fruitful as unanimous resolutions were made on the way forward.

“Having regard to the need for all hands to be on deck in addressing the security concerns across the country, it was agreed that the structure of Amotekun should also align with the Community Policing strategy of the Federal Government.

“It was also agreed that necessary legal instruments will be put in place by each of the States to give legal backing to the initiative and address all issues concerning the regulation of the security structure”.

Akeredolu, who also described the meeting as “fruitful”, said: “We have rubbed minds and all of us have agreed on the way forward. The most important one is that we are going to have legal framework to back this Amotekun. And this legal framework is going to be one which we all are going to look at and will be sure to go without any hindrance”.

When asked if the security network would be put on hold while the necessary conditions were being met, he said “no. What I believe in our resolution is that Amotekun is there, you know the federal government is starting community policing, in essence really it is about community. So, we are going to work together to see the community policing and Amotekun work in a way”.

He was asked why such arrangements were not pursued before Operation Amotekun was launched, the governor said there were consultations.

He also explained that “the Federal Government is not trying to stop it. The attorney general has spoken on that, I’m sure you have all read the statement that he was misinterpreted. So it’s so clear, there was no time that government wanted to stop Amotekun and the AGF has spoken, it’s all about us, so there is no problem”.

The meeting was at the instance of the Governors who asked to see President Muhammadu Buhari over the controversy surrounding the Amotekun Initiative. However due to the President’s foreign engagement, he asked the Vice President to host the meeting.