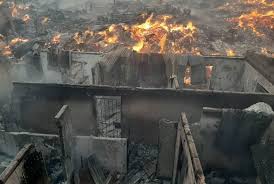 About 15 shop owners were said to have slumped due to the wildfire that razed Amu Timber, a Lagos popular plank market on Saturday morning.

Residents were divided over when the fire started.

Some said the fire started around 11pm while others said it was around 12am.

Goods worth hundreds of billions were lost to the inferno.

The shop owners, some of who live in far places, could not savage any of their goods.

None of those on ground knew the cause of the fire.

“It couldn’t have been from the electric distribution because we don’t use power from either Ikeja Electricity Distribution or Eko Disco.

“We all use generating set in this market, ” a trader told The Nation.

Some residents lamented that the fire service didn’t respond on time and when their vehicle arrived, it came with half tank water.

“It took another one hour before three more vehicles arrived. I think the state fire service could do better, ” Femi Akiola told The Nation.

Acting Head of Lagos State Fire Service, Mrs. Margaret Adeseye blamed the crowd for the delay in putting out the fire.

“Our men responded swiftly to the emergency call with a vehicle.

“On getting to the scene, he called for more support and three additional vehicles were deployed to the scene.

“But we faced similar challenge of crowd control. Our men couldn’t get to the fireplace.

“We had to call on the police to help push clear the way before the firefighters could access the place, ” Mrs Adeseye said.

In a similar incident, the Lagos State Fire Service received an emergency call around 6pm on Friday to Yaya Abatan by Makunola Street, Ogba, Ikeja, Lagos, where a storey building of 36 rows of shop in an open premises of about 3 plots covering both streets was gutted by fire.

The fire was eventually put out at about 8:40pm by a combined crew of Alausa and Agege Fire Stations of the State Fire Service with support from the Nigerian Police, Lagos Neighborhood Safety Corps among others.

The fire, however, severely damaged the 18 shops at the upper floor of the building.

The firemen were able to reduce the other 18 shops to slight damage due to the intense radiation heat from the fire.

Mrs. Adeseye said no life or injury was recorded as the shops were unoccupied as at the time of the fire.

She concluded that investigation is ongoing to unravel the cause of the fire while admonishing Lagosians to be safety conscious and quickly report any untold circumstances to the Lagos Emergency Toll Free Lines 767 or 112 for swift intervention.