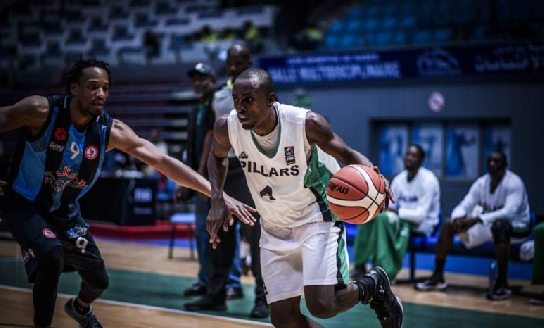 Standing at six feet, Kano Pillars and Nigeria national team basketball player, Dike Azouma, isn’t a giant on court, but his accomplishment is very impressive. Coming from the humble Ajegunle (AJ City) sport family, Azouma has made giant impact locally, abroad and in the senior national team (D’Tigers) where he has consistently played for 12 years. He has won four titles locally and become a hero of the game in a career that traversed the north, west and mid Nigeria. Currently, he stars for Kano Pillars, one of the biggest teams in the Nigeria elite basketball league.

Azouma is profoundly proud of his AJ city roots: “I am proud of Ajegunle because it made me who I am today.

Remarkably, Azuoma, who was trained by table tennis playing father, took to football and table tennis first before switching to basketball.

According to him: “I used to play football and I suddenly switched to basketball. So many people were surprised, because they knew my football days. I also played table tennis too. People think I am a professional in tennis whenever they see me play.”

In this interview with MORAKINYO ABODUNRIN, Azuoma talks more about his growing up days in Ajegunle, his family, encounter with legendary Hakeem Olajuwon and missing out of the Nigeria team to the 2020 Basketball World Cup. Excerpts…

Why are you called Kano Pillars king of basketball?

I play for Kano Pillars and the Nigerian national basketball team. I cannot call myself the star of the team; I am just part of the team. There is Abubakar Usman who is called the ‘field marshal’ or ‘Seriki’ because he came before me. I came here and the fans welcomed me. Kano is just like home to me.

When did you join Pillars and what has been your best moment with the team?

I joined Pillars in 2017, after playing outside the country in 2016. I have played for big teams in Nigeria before joining the team. Joining Pillars was a great opportunity for me because I have been their rival for long. It was a great privilege for me in 2017, which was also the year we won the league. It was great. Pillars gave me the platform to be called the five-star general in Nigerian basketball, and I appreciate it.

Growing up was all about basketball or was there any sport you intended doing before switching to basketball?

I was once a football player. I used to play football and I suddenly switched to basketball. So many people were surprised, because they knew my football days.

I also played table tennis too. People think I am a professional in tennis. I went to Shoprite a few days ago, and was playing tennis, and people were watching with interest. They were later surprised to find out I was a basketball player.

Why did you switch to basketball majorly?

There was a day we were to play a football match at Navy Barracks, Ajegunle. The team did not show up and I was upset, because we were to play like the East Coast and West Coast.

Because I was bored I decided to do something and that led me to a basketball court nearby. I decided to go and throw some balls and that was how I started playing basketball.

I moved to my secondary school, United Christian Secondary School, Apapa, and continued playing basketball. I got a scholarship and was part of the pioneer team that started the Nestle Milo Basketball secondary school games

What was it like growing up in Ajegunle and who are the guys you grew up with?

Yes! I grew up in Ajegunle, and I met many footballers in Ajegunle like Emmanuel Amuneke, Samson Siasia, Henry Nwosu, Ifeanyi Udeze, and others. In basketball, I have mentors like Idris Busso.

I am proud of Ajegunle because it made me who I am today. National fame for me started from AJ City where I was spotted and called up to the national team. I was first called to play at the National Sports Festival in 2006 where I won a silver medal. I was also called up to the National U-18 team before moving to the senior national team; D’Tigers. In 2011, I was part of the Nigerian team that won the gold medal at the All Africa Games and the bronze medal in 2015. I have been in the national team for twelve years now. In 2017, I was also a member of the national team that won the silver medal in Afrobasket in Tunisia.

I never regret any day because it is all the same. It is when you discover your talent that you make use of it. It is all about sports, and you choose the sport you want to. I am also a football fan. I support Barcelona. I enjoy basketball, and I hope that my son takes over from me when I am done. I am not going to force my son to play basketball. He is going to decide for himself what he wants with his life. But if he chooses to play basketball, I will always support him.

Afro Basketball 2017, tell us about the ups and downs leading to the silver medal.

I can say that 2017 was a great year. Nobody believed in us, not even our country but we believed in ourselves. We did not have enough time to train or go to Europe. But we did the little we could; the team was built up by Coach Alex Iwuora. The chemistry was there. We were like brothers, and we stood by each other till the end, when we lost the final to Tunisia, the host. Everyone thought Senegal would win the championship, but they were shocked to see us progress to the final, including Nigerians back home; we ended up with the silver medal. I made a promise to my son to bring a medal back home. I am happy I fulfilled it.

What progress have you made since 2017 till now?

In 2018, I made it to the Commonwealth Games, the World Cup and the Nations Cup.

How many championship have you won locally and what are your plans to play abroad?

I have won so many championships in Nigeria. I have won the league four times. I won the Most Valuable Player of the league in 2012. I won the 2015 league and in 2017 with Kano Pillars.

I have played so many finals and I came second with Lagos Islanders and travelled with Union Bank team for continental action.

Tell us about your love for table tennis

Table tennis is a game I love. My father was a table tennis player. When I was growing up, my father got me a tennis board, after my junior WAEC. I was well known in my street as a tennis player, and that was why everyone was surprised seeing me later with basketball. I am so grateful to God, and I intend to keep pushing.

Who are your mentors and how much of their qualities have you added to your game?

My mentor was Kobe Bryant, a.k.a ‘Black Mamba’, and Roger Milla. They are great players. I am often referred to as the ‘Mamba’ family. Michael Jordan is also my mentor because he is a legend of the game too. That is why my son and I love to wear Michael Jordan clothes and shoes. If a child is growing up in basketball right now and you ask which player he would love to be like, he would say, ‘I want to be like Michael Jordan.’ He has inspired a lot of players.

There are also many great basketball players; the like of Nigerian great Akeem Olajuwon, Jordan is like a logo in basketball today. He is a popular brand and name.

Have you met any of your basketball heroes?

My first time was when he came to Abuja for a programme. I have also been privileged to watch him play. I also watched Tunji Awojobi, who is a legend in Nigerian basketball today.

I was also privileged to play in the same team with Tunji Awojobi in the national team before he retired. I was a rookie, and he encouraged me a lot. I will not forget Tunji Awojobi; he is a legend indeed.

Tell us about your family; how did you meet your wife?

My family is in the United States. My son was born in Oklahoma.

Aside God, what are the things that you are always happy about?

What makes me happy is God. That is the only thing that can make you happy.

Who are your favourite stars in Nollywood?

They are Pete Edochie, Chiwatelu Agu, Rita Dominic, Omotola Jalade-Ekeinde, Mercy Johnson, Patience Ozokwor and Richard Mofe-Damijo. I watch Nigerian movies a lot because majority of my teammates laugh at me when I travel and they ask me of movies and I don’t have anything to say. So I watch movies a lot and play a lot of games.

What are the dreams you have not achieved?

I have plans to sponsor the widows and the less-privileged and to give them hope that they can make it in life.

Are there any other things you would like to add? How long do you want to play before retirement?

For now, I am still playing till the time comes for me to say good bye to the game.