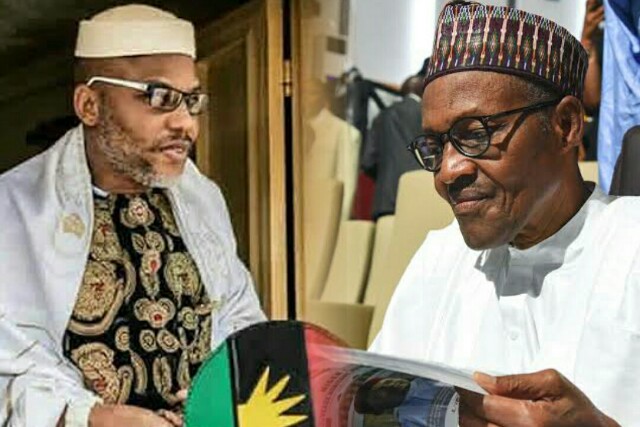 The leader of the Indigenous People of Biafra (IPOB), Nnamdi Kanu, has denied striking a deal with the Nigerian government led by President Muhammadu Buhari.

Naija News had reports that Kanu’s statement is coming a few days to the burial ceremony of his parents which he is expected to grace.

This online news platform had reported earlier that the parents of the IPOB leader, late HRH Eze Israel Okwu Kanu and his wife late Ugoeze Sally Nmeme Okwu-Kanu will be buried on Valentine’s day, Friday, February 14, 2020.

Naija News recalls that before Kanu disappeared from Nigeria sometime in September 2017, he was being prosecuted on charges bordering on treasonable felony instituted against him as a response to his agitation on the IPOB platform for the secession of an independent Republic of Biafra from Nigeria.

The IPOB leader disappeared from Nigeria following soldiers’ invasion of his home in Afara-Ukwu, near Umuahia, Abia State, in September 2017. Kanu, a dual citizen of Nigeria and Britain, is believed to be currently residing in the United Kingdom.

Following Kanu’s disappearance and eventual resurgence in Israel late 2019, many accused the IPOB leader of taking bribe from the All Progressives Congress (APC) led by President Buhari to ensure his release from prison.

However, reacting to the claim in a recent broadcast on Radio Biafra, Kanu denied the allegation, saying he would never collect bribe from Buhari’s government especially not now that his parents are dead.

“I never took money from the zoo when I was in prison, is it now that they killed my parents that I will do so?” Kanu questioned.