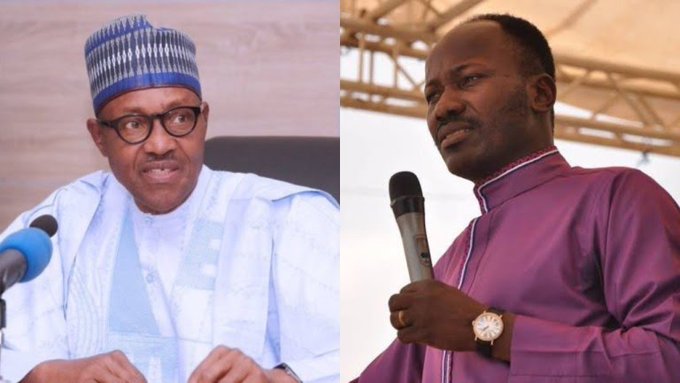 The Senior Pastor of Omega Fire Ministries, Apostle Johnson Suleman, has said President Muhammadu Buhari is not a religious bigot.

In an open letter to the presidential spokesperson, Femi Adesina, Apostle Suleiman stated that not everyone who speaks truth to power is partisan or political.

“Sadly, in Nigeria and especially under this current administration, anyone who speaks truth to power is termed partisan or political; some even say such a person hates President Muhammadu Buhari,” he wrote.

The controversial clergyman also revealed that his father was a chieftain of the All Progressives Congress (APC), adding that he has a good relationship with APC stalwarts.

“But how can a man hate his president? That’s giving a dog a bad name just to hang it. Let me give you a few shockers, sir, which many Nigerians don’t even know. My biological father is an APC chieftain; a major frontline and stakeholder in Edo state politics with the ruling party. The governor and the deputy governor of Edo state are very close to me and the national chairman is my brother. Yet, we all relate well and they worship in our church whenever they are around because they separate issues from the relationship. That is principle sir!

“I have built schools and given to governments, fixed government roads and rehabilitated people who were convicted. These are verifiable as you can ask my state governor. If I hate this government, I won’t do all that.”

Apostle Suleiman also claimed that President Buhari was not a religious bigot, adding that Buhari’s aides are not doing enough to project a better image for him.

READ  WHO, doctors, others split over ‘coronavirus drugs’

“How can that be? A very good friend of mine recently spoke to me about President Buhari and I told her my views of him and she laughed. And that evening, President Mumhamadu Buhari called me on phone and we exchanged pleasantries. And, at the end, I prayed with him in Jesus name and he said Amen! Tell me, which religious bigot does that?

“So, seeing what is happening now tells me that he is surrounded by people who are painting him wrongly before some who aren’t privileged to know him. Or has he changed from being whom I knew him to be then?”