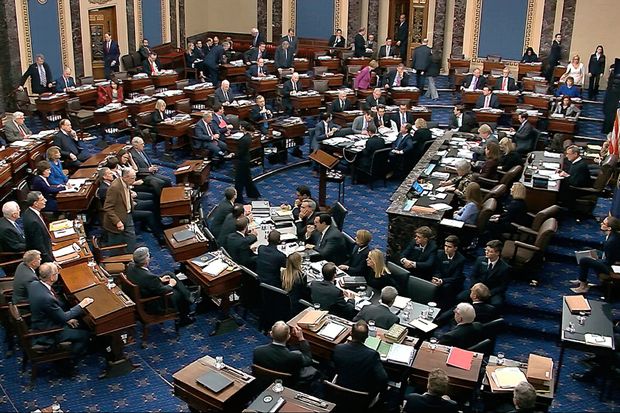 Following the impeachment charges brought by the House Democrats to the Senate to remove Trump out of office, the US Senate has voted to acquit President Donald Trump which signal an end to the attempt to oust him from the White House ahead of the November 2020 elections.

Donald Trump was accused of improperly sought foreign influence in the 2020 election by demanding a corruption investigation in Ukraine and the impeachment process started in September 2019 over allegations levelled against him.

Recall that the Senate rejected a proposal by Democrats to call additional witnesses in a 49-51 vote that saw Susan Collins (R-Maine) and Mitt Romney (R-Utah) cross the aisle recently.

The president’s lawyers argued that all the relevant testimonies and documents should have been produced during the proceedings in the House, which ended on December 18, 2019 with a partisan vote to impeach Trump.

Even though the Democrats argued that impeachment was necessary because Trump was a “clear and present danger” to “our democracy,” House Speaker Nancy then waited four weeks to send the case to the Senate

There, Democrats argued that additional witnesses were needed to establish the exact circumstances of Trump’s decision to withhold military aid to Ukraine in order to – they claimed – pressure the government in Kiev into investigating a political rival ahead of the 2020 election.

The claim originated with an unnamed intellig1ence community “whistleblower,” who alerted House Intelligence Committee chair Adam Schiff (D-California) of the phone call between Trump and Ukrainian President Volodymyr Zelensky in July 2019. Schiff and his team of impeachment managers argued that Trump withholding the aid was an attempt at pressuring Kiev into investigating corruption at Burisma, a gas company that had hired the son of Vice President Joe Biden in 2014.

Biden is now one of the candidates for the 2020 presidential nomination, and Democrats argued this amounted to foreign interference in the election. Calling this an abuse of power, Democrats also charged Trump with “obstruction of Congress” for invoking executive privilege and refusing to allow some of the White House officials to testify in impeachment proceedings.

Trump’s lawyers argued that Schiff’s subpoenas had no validity until the House voted to actually authorize the impeachment process, on October 31. They also said that the president’s actions were perfectly consistent with his constitutional authority, that investigating Burisma did not amount to Ukrainian interference in US elections, and that Trump was denied due process rights because Democrats did not give the Republican minority a hearing day or the right to call their own witnesses.

The acquittal comes a day after Trump’s triumphant State of the Union speech, and the embarrassing fiasco of the Democrats’ caucuses in Iowa, where even according to incomplete and questionable results, Biden ended up fourth.

Trump is only the third US president ever to be impeached in the House, after Andrew Johnson in 1868 and Bill Clinton in 1999. In all three cases, the impeachment failed in the Senate, allowing the president to stay in office. Contrary to popular opinion, Richard Nixon was never impeached – he resigned before the official proceedings could begin, in August 1973