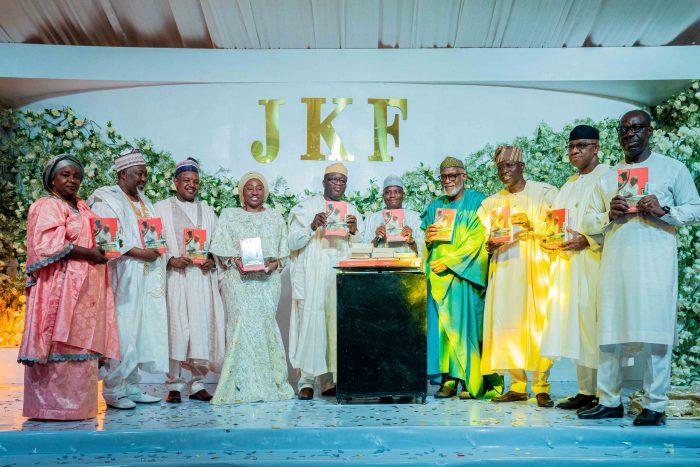 Eminent Nigerians, including governors and others thronged Ekiti State on Sunday to felicitate with Governor Kayode Fayemi, as he clocked 55 years.

Others are the Archbishop of Ondo Anglican Diocese, Bishop Christopher Omotunde, Bishop of Ekiti Catholic Diocese, Bishop Felix Ajakaiye, and traditional leaders in the State led by their chairman, Oba Ajibade Alabi.

In his sermon, the Bishop of Oyo Diocese, Most Revd Emmanuel Badejo has called on political leaders in the country to put the people above party and personal interests in order to create a prosperous nation.

The Bishop made the call in Ado Ekiti at the thanksgiving mass for the 55th birthday of the Governor of Ekiti State, Dr Kayode Fayemi.

Badejo, who stated that God is calling on leaders to put people above party because the people come first, warned that those who fail to do so would “become liabilities and be thrown into the dustbin of history”.

The clergyman also urged Nigerians to roll up their sleeves to support leaders who want to create a better society.

He noted that the country was “wounded by injustice” and called on leaders to become lights to displace the darkness surrounding the nation.

“We must roll up our sleeves to support leaders and those who want to create a better society. The light of honesty is disappearing; the light is not going round enough. God is calling on leaders to put people above party, to put people above personal interests because the people come first and they are God’s greatest legacy. Those who fail to do so will become liabilities and thrown into the dustbin of history”, he said.

While congratulating Fayemi on his 55th birthday, Bishop Badejo hailed the governor for spearheading various people-oriented programmes in the different capacities he had served the people.

The clergyman particularly commended the governor and other Southwest governors for coming up with the Western Nigeria Security Network, popularly called Amotekun, saying that the governors have “demonstrated a superior understanding of what it means to prioritise the sanctity of human life”.

In a prophetic manner, the Catholic Bishop said Ekiti might be a small State but it had all it takes to lead Nigeria in the near future.

He prayed God to give Fayemi ” good collaborators and trustworthy allies” as he continues to serve the people selflessly.

In his remarks, Governor Fayemi reiterated his promise to dedicate the rest of his life to the service of God and humanity, stressing that “a life without service to God and humanity is not a life worth living.”

The Governor who was full of gratitude to God, his wife, his family members and his allies, admonished his well wishers to keep faith in God by trusting Him (God) to use those chosen to occupy leadership positions to tackle their challenges.

Responding to challenges in life, Fayemi, said challenges are opportunities to make a difference in the lives of human beings, adding that he would continue to focus on the work of God in improving the situations of his society and the country.

“All of the challenges will not go away overnight but you should believe that God is the one that can always use those of us that have been given grace to lead, to be of service to all his children, we have no choice than to continue to commit ourselves to the Service of God.

“I have been a beneficiary of God’s generosity, because for me challenges are opportunities to make a difference in the lives of human beings, so if you allowed me, let us just focus on the work of God to improve the conditions of our society and Country.

In his goodwill message, Sokoto State Governor, Aminu Tambuwal described Fayemi as “a governor who is not partisan and has proven himself to be pan-Nigeria and had a relationship with everyone regardless of political affiliation.”

Tambuwal added that Fayemi is doing incredibly well as a very accommodating and patriotic Nigerian leader.