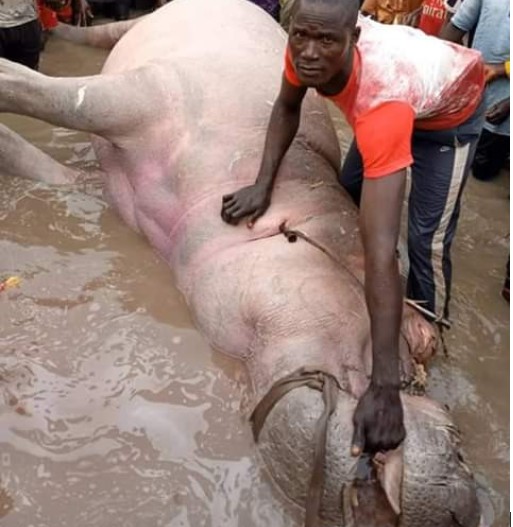 Fishermen in Samanaji town in Koko Besse Local Government Area have succeeded in trapping Hippopotamus believed to be wrecking havoc on Farmlands in the area.

The Aqua animal was killed by teams of fishermen who have been trailing it’s movements for sometime.

Reports from the area indicated that the Council’s Chairman Bello Sarkin Gabas and Council Members have visited the scene this morning.

Samanaji town is situated on the banks of River Niger thus, having constant encounters with aqua creatures occur rampantly which may have negative effects on their population.

However, with no fishing regulatory mechanism in place, killing of endengered species may continue unabated across riverine Communities and other areas with significant wild life population.

It is however worth of note that the Kebbi State Governor Senator Abubakar Atiku Bagudu has been in the forefront of saving Wild Animals intruding into the State’s territories while on grazing adventure. Reports from Bagudo Local Government Area indicated that the Elephants quarantined in the area are still there under the watch of State and Local Government officials.