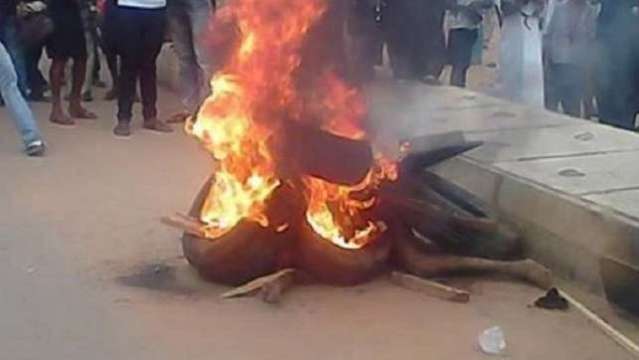 Tragedy as a middle-aged man simply identified as Victor was set ablazed by angry mob for stealing a fowl.

The sad and tragic incident occurred on Tuesday at about 5:00am at Abitu Avenue by Ekpo Edem beside Living Faith Church, Ekpo Edem in Calabar South Local Government.

According to local media report, the deceased simply identified as Victor has been in the acts of stealing items such as car battery, generators, livestocks before he was finally apprehended and killed.

It was further learnt that the deceased has been caught by vigilante security operatives and night guards in the area many times, but always released with the hope that he would change his ways.

According to an eyewitness who prefer anonymity, he disclosed that Victor came as usual to perpetrate his heinous crime that morning, but this time around, it was a chicken.

He added that it was the noise of the chicken that alerted the neighborhood, and people later hunted him down at about 4:00am, beat him up before he was set ablaze.

Reacting to the incident, the State’s Police Public Relations Officer, ASP Irene Ugbo confirmed the incident and decried the decision of the residents, while pledging that indiscriminate activities will be wiped out of Calabar.

He also warned the people of the state not to take laws into their hands, adding that anybody caught in jungle justice activities will be brought to book.

“We are not supporting criminals and their activities, but people must understand that jungle justice is against the law, they should hand over suspects to the police for further investigation and prosecution,” she said.