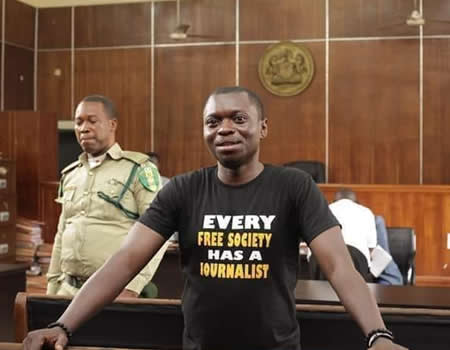 Agba Jalingo, a Nigerian journalist on trial for treason, has been granted bail by the court, after spending 174 days in detention in both the police cell and Calabar prison.

Mr Jalingo, the publisher of CrossRiverWatch, was arrested on August 22, 2019, over a report alleging that Cross River State governor, Ben Ayade, diverted N500 million belonging to the state.

The court asked that those standing as surety for the journalist must make a refundable deposit of N700,000 to court registry to perfect the bail.

Mr Jalingo was earlier denied bail twice by another judge, Simon Amobeda, who recently withdrew from the case after a secret recording where he (Amobeda) allegedly made some “biased” remarks against Mr Jalingo, was leaked to the press late last year.

Mr Amobeda is also a judge of the Federal High Court, Calabar.

Mr Jalingo’s case is prosecuted by the Cross River government which took over the case from the police. On the prosecution team were led the Attorney General of Cross River state, Tanko Ashang, and the Director of Public Prosecution in the state’s Ministry of Justice, Greg Okem.

Apart from Mr Ochinke, James Ibor appeared in court for the journalist.