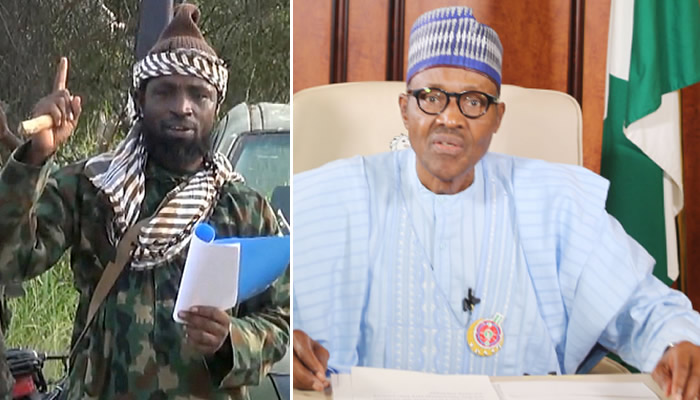 BOKO Haram leader Sheikh Abubakar Shekau has warned President Muhammadu Buhari not to ever return to Borno State saying that if he dares doing so again his boys will be on the ground waiting for him.

Earlier this week, President Buhari arrived in Maiduguri, the Borno State capital to commiserate with local people following the recent murdering of 30 innocent people in nearby Auno. They had been slaughtered by Boko Haram after the Nigerian military had locked the gates to the city at night, leaving them to the mercy of the terrorists, who murdered them in cold blood.

President Buhari, who stopped over on his way back from Ethiopia where he attended the African Union summit, met with the Borno State governor Babaganu Zulum and His Royal Highness Abubakar Ibn Umar Gabai, the Shehu of Borno. However, as soon as he left , Sheikh Shekau warned that if the president returned to the state, his members are fully on ground in the northeast and would attack if he visits Borno again.

In a Youtube video, Sheikh Shekau said: “Buhari came to Maiduguri pretending to be a good man but he shouldn’t try it again.”

He added that the remaining Chibok girls would only be released if the federal government let go of the sect members currently in detention. Boko Haram has released some of the Chibok girls it abducted in 2014 but is still holding on to some of them as well as Leah Shaibu, who was abducted last year.

No sooner had President Buhari left Maiduguri and Boko Haram launched another attack on Jiddari Polo general area of the metropolis, close to the 21 Giwa Armoured Barracks. Although the sounds of the gunshots subsided yesterday evening, many residents who fled into the city were still stranded.

President Buhari was booed by angry crowds when he visited Maiduguri as local residents expressed this displeasure at his failure to end the mayhem. Angry youths shouted in Hausa: “Bama so” “Bamayi!”, meaning “we don’t want, we’re not interested because you have disappointed us.”