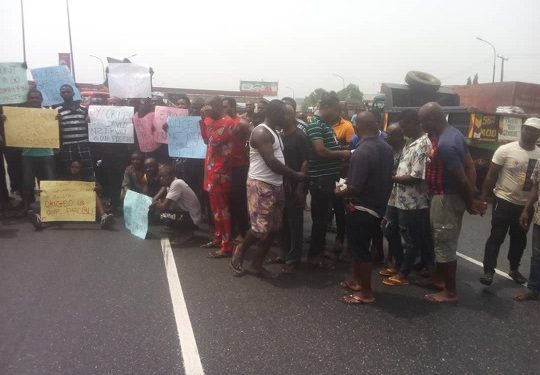 No fewer than 1,000 tipper drivers in Anambra state on Tuesday blocked the Onitsha -Enugu expressway, protesting alleged imposition of taxes, intimidation and violation of Court judgement in the agents of state government.

The situation made commuters to suffer hectic time at Onitsha as security agencies battled in vain to appease the protesters .

The came with placards bearing different inscriptions like “Governor Obiano rescue us from the hands of illegal agents of government”, “we are not slaves”, ” we want to take care of our business without interference” and “respect Court judgements” among others.

They said they decided to adopt the peaceful demonstration since the government was yet to address their grievances despite various appeals, correspondences and visitations to decision makers.

The Nation gathered that drivers with six cubic tippers and 12 cubic tippers were respectively taxed N100 and N200 daily during the tenure of former Governor Peter Obi.

But it was learnt the current administration allegedly tax them N700 and N1400 per a trip of laterite, gravel, sands or stones. As a result, they approached a Federal High court sitting in Awka in a suit number FHC/AWK/CS/104/2017.

The Court held that the Anambra state government, officials of the state ministry of environment, their agents and privies and other persons acting by or through them, had no right to make laws or rules, formulate policies, impose taxes or levies and or charge and collect dues or revenue on sand, stones, laterite, gravel and the like.

However, addressing reporters during the protest, Comrade Emmanuel Ezeokafor, the Coordinator, Anambra Tipper Drivers Association, alleged that the state government neither obeyed nor appeal the judgment since 2018.

Rather, it was employing the services of law enforcement agents in intimidating and harassing his members to be paying the ‘obnoxious’ tax.

Ezeokafor, who explained that the drivers had in several occasion, sought audience with the governor but all was in vain

He added that they had written petitions and memorandum of understanding where they requested to be allowed as a union to tax their members as they (the drivers would agree to pay) and remit same to the government monthly as other transporters do but their plea failed on deaf ears.

Acccording to him, “it negates section 4(2), section 4(3) and item 39 in the Exclusive Legislative List in the second schedule (part) of the constitution of federal republic of Nigeria 1999”

The President General, Great Tippers Association, Anambra state chapter, Chief Ebuka Davidson Orakwe, said the protest which was 8th, had been held across major towns in the state.

He said it would continue until the state government hearkened to their demands as the obnoxious taxation had caused most members to relocate from Anambra to other states in the South East geopolitical zone.

When the State Commissioner for Information and Public Enlightenment, C Don Adinuba, was called for reaction, his line was not available.

The aide, who did not want to be quoted, said Obiano had not instructed anyone to be collecting such taxes from the tipper drivers, adding that some people were just dropping the Governor’s name to tarnish his reputation