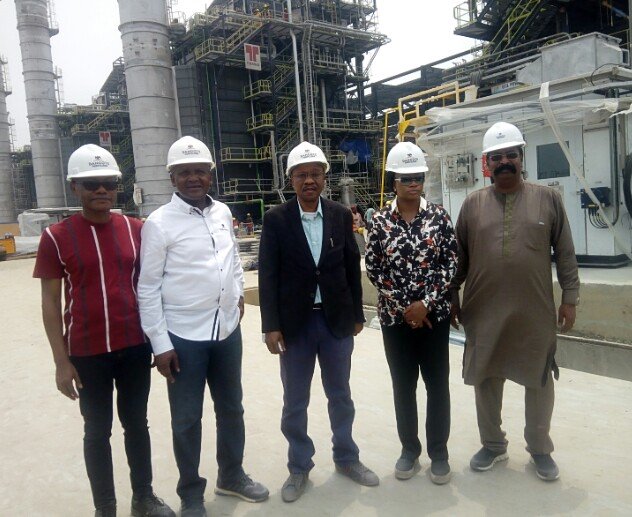 The Dangote Group on Saturday said its $2 billion Granulated Urea Fertiliser plant, the biggest in the world, located at Ibeju Lekki, Lagos would begin operation in May.

Aliko Dangote, President of Dangote Group, said this when he led the Governor of the Central Bank of Nigeria (CBN), Mr Godwin Emefiele, on a tour of the Dangote Refinery, Petrochemicals and Fertiliser projects.

Dangote said a pre-testing of the fertiliser plant had already begun, adding that the project would be the largest fertiliser plant in the world with its three million tonnes per annum capacity.

He said it would make Nigeria the only Urea exporting country in Sub-Saharan Africa, adding that the fertiliser and petrochemicals plants were capable of generating $2.5 billion annually.

According to him, the amount is almost 10 per cent of what Nigeria is getting from home remittances, which is one of the highest in the world.

Dangote also disclosed that the refinery project, which was 48 per cent completed, would make Nigeria the largest exporter of petroleum products in Africa.

”One of the reasons the CBN is supporting us is that by the time we become operational, we will not only be creating jobs, but we will reduce the outflow of foreign exchange; not only in petroleum products, but in petrochemicals and fertilisers.

“We will be one of the highest foreign exchange generating companies going forward.

“I must really confess that without the government’s support, there is no way we could have done what we have done so far.

“I think we must thank President Muhammadu Buhari for his policies. I thank the CBN governor and management for bringing down interest rates to encourage more entrepreneurs to go into mega projects like this.

“We should not wait for foreign investors to come and develop our economy.

“It will never happen. So we have to do it ourselves and the only way to do it is to take advantage of the low interest rates, and the banks being forced to loan money out.”

Emefiele, commended the Dangote Group for its commitment toward bringing the project on stream as planned and expressed satisfaction with the facilities on site.

“The reason that I am here today is to see what is going on on site.

“This time that the economy is going through its own challenges, there is need for us to diversify the Nigerian economy from oil to other areas where we have abundant resources. ”

Emefiele said the fertiliser plant would stop importation of fertilisers, as about 25 per cent of its products would be used for domestic consumption to boost agriculture in the country.

According to him, the plant will also generate a minimum of $750 million through export annually.

“The 650,000BPD-capacity refinery, when operational, will not only satisfy local consumption but will also position Nigeria as a major exporter of petroleum products.

READ  Nigerian Movies You Can Watch On Netflix (Full List)

“Nigeria is so central, and this refinery will serve almost the whole of Africa, which will lead to cheap cost of freight.

“This project is so strategically positioned that it will even make the final price of petroleum within Nigeria and even outside Nigeria to be lower than those imported outside the African continent.

“We need to encourage other Nigerians and we will keep saying this, Nigerians must stand tall and be ready to come out and support their country,” the CBN governor said.

He disclosed that apart from the low interest rate regime, the government was also putting other policies in place to rejuvenate industries and create employment opportunities for the citizenry.

“We will want to support any Nigerian or foreigner who finds Nigeria as a good investment destination. Whatever we need to do to help you, we will do it.

“That is why we are forcing the banks today that they must do what is right by lending to credible persons and act as catalyst to our economic development,” Emefiele said.